(4) Mon May 24 2004 00:26 PST Hummus Corollary: I know this is turning into the hummus weblog (I actually had an interesting entry to post yesterday, but at the last minute I discovered my data was wrong so I have to redo it today), but it transpired that Mark was also making hummus and that, in a corollary to my blender/food processor law of hummus, it turns out that if you have a real food processor instead of a dinky 2-cup "microprocessor", you can make hummus in the processor only. Mark likes his hummus a little chunky, though.

Also, even though it might sound clever, don't bring your hummus to the party in a leftover Trader Joe's hummus container, or people will unintentionally insult your wondrous hummus by thinking it's the grainy Trader Joe's stuff.

(6) Mon May 24 2004 19:17 PST The Wages of Combinatorics: Trying to figure out the best way to present the licensing interface for NewsBruiser, I decided to see which Creative Commons licenses were the most popular. I ran a Google link: search for all 11 Creative Commons licenses, plus additional CC-provided licenses like the public domain dedication 'license' and the CC-GNU GPL and LGPL. I used the canonical license link: the URL I would link to if I were licensing something. It turns out that only four or five of the 15+ licenses are used by any substantial number of people.

The top five licenses are all Attribution-type licenses, with the most popular being Attribution-NonCommercial with nearly 25,000 hits. The least popular Creative Commons license, with only 13 takers, is the CC-GNU LGPL license. 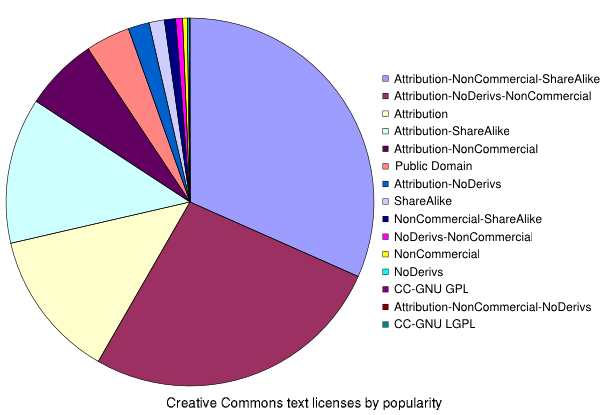 It looks like Creative Commons has enough licenses. The core licenses have proven very effective at meeting people's needs, and there's no need to keep minting new ones because as far as I can tell the new ones don't get used. This might indicate that the new licenses are created in response to "You should have such-and-such a license" feedback rather than in response to people who don't like any of the existing Creative Commons licenses.

For instance, consider the Creative Commons "Music Sharing License", which is effectively the same as Attribution-NonCommercial-NoDerivs. It's a lot more popular than its forlorn twin, but here "popularity" means 177 hits on Google instead of 16. It's dwarfed by its own commentary: Googling for "music sharing license" gets you 530 results talking about the latest license from Creative Commons. Compare to a string search for, eg. "Attribution-Noncommercial-Sharealike". You get people actually using the license, not talking about it. Creating a new license gets Creative Commons some buzz, but not much more; it looks like everyone who wants a license already has one they like.

The GNU licenses were probably created on behalf of GPL fanatics who kept bugging the Creative Commons people "why don't you have a GPL license?". Now that they're here, few people use them. My guess is, most people who want to use the GPL are using the actual GPL.

I didn't include them (or Music Sharing) in the survey because they're for music, but the URLs to the Sampling and Sampling Plus licenses are also mentioned almost nowhere on the web. This might be because no one uses them, because they're newer, because they don't get used correctly, or because they get used in ways that Google can't pick up. My methodology isn't as good for licenses not used by web pages (which probably also affects the GPL/LGPL numbers), so I will reserve judgement on these--but again, I searched for links to the URL I'd link to if I were licensing something under that Creative Commons license. The fact that the most popular licenses get tens of thousands of hits indicate that there's not some systemic disconnect where people don't link to the license they're using.

On the flip side, it does look like the CC public domain dedication is getting some good use--it's the sixth most popular license. I think this and the Founders' Copyright license (about which below) feed into a core competency of Creative Commons--being a trusted repository for copyright assignments.

If you want to let someone choose a Creative Commons license (in addition to whatever non-CC licenses), you don't need a bunch of orthogonal sets of radio buttons like the Creative Commons license picker has. You can provide four individual radio buttons and an 'other' field. This will handle 84% of the cases without greatly inconveniencing the other 16% of the people. (You want an 'other' field anyway, since people come up with all kinds of crazy non-CC licenses for their stuff.)

I couldn't measure the success of the Founder's Copyright because I couldn't find one canonical URL for the license. However, it's a good idea and I'm going to make it an option in NewsBruiser. This brings up my other UI design factor: in addition to the four most popular Creative Commons licenses, you can add whatever ones you like and think people should use. They'll be more likely to be used if they're options and not an 'other'.