Thu Sep 02 2004 07:21 PST Subscribed to Seth: Seth's diary is now on NewsBruiser, after an evening of rewrite rule magic and Apache configuration frustration. Now you too can subscribe to his RSS feed, or just enjoy the superior navigability of NewsBruiser over... HTML files. Yeah, that was hard to beat.

(15) Thu Sep 02 2004 09:40 PST Godzillopoly: Here's a first stab at my ideal Monopoly game, based on an idea of Kevan's. This version makes a couple small changes, all in the spirit of the existing rules, and evens the game out a little by making the endgame less depressing and hopeless for the players who aren't winning. However it does not inject any additional element of skill into the game, so it's not perfect.

Basically you add Godzilla(tm), or my non-licensed, freely-usable character Freezilla... uh-oh, let's call him Lizardbeast and get rid of the spikes on his back. There, we're perfectly safe! Anyway, as I was saying. you add the loveable and completely original character Lizardbeast as a player in your Monopoly game (tiny metal Lizardbeast tokens sold separately). When the first building is placed he is placed across the board diametrically opposite that building. For instance, if you build a house on New York he is placed on Boardwalk. Subsequently he rolls the dice (actually, the banker rolls for him) and moves as any other player, after the last player has moved. The only differences between him and a human player are:

If Lizardbeast lands on a square that makes you do one of these things, he stays on that square and does not do them. When he passes Go, he does not collect $200.

If Lizardbeast rolls doubles he gets to move again, just like a human. If he rolls three doubles in a row, he does not move the third time, but neither does he go to jail. How is that supposed to work anyway? "Ladies and gentlemen of the jury, the facts are clear. The puppy dog you see before you rolled two threes. Then he rolled two ones. Then, in the presence of numerous witnesses, he rolled two sixes. The state rests." Anyway. 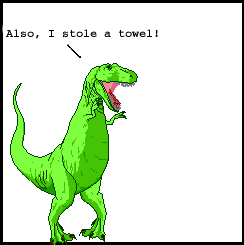 "I noticed you said 'one building'," you say tenatively. "Does that mean--" Yes! Build a hotel, if you dare, in your hubris! When Lizardbeast checks in, your hotel does not check out! He will stomp it as easily as he would a single house!

Should Lizardbeast succeed in destroying all buildings on the board, he becomes bored (so you don't become bored moving him around all the time when he can't do anything) and leaves until such time as someone once again dares to develop their property. At that point he is reintroduced opposite the first erected building, as before.

Discussion: This variant alleviates some of the rich-get-richer that makes a Monopoly endgame infuriating if you're losing and boring if you're winning. However it does this by simply disrupting the endgame at random and moving you back into the middle game. It doesn't solve the fundamental problem of the endgame where it turns into a stochastic grind and you just want to make the computer finish it, but you're not playing on the computer. My current thinking involves buying Lizardbeast bait to leave on your opponents' properties, but it is as yet unformed.

Crap, I forgot to change the name of the game.