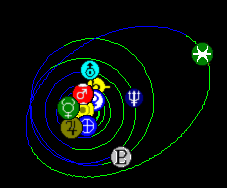 In honor of the official naming of the scattered disk object formerly known as 2003UB313, I'm writing a short story called "The Fungi From Eris" (it's almost done, thanks). I'm pretty sure it's not publishable, so I'll probably just put it up on Crummy, but let me know if you can think of an outlet that might take a near-future semi-Mythos story with a news hook.

Anyway, while trying to bring to my story the scrupulous concern for scientific accuracy that is the hallmark of the Lovecraftian style, I became curious about where Eris is, exactly. Fourmilab's Solar System Live orrery only shows the nine textbook planets, but you can show an additional object on the map by pasting in its orbital elements.

Orbital elements are sets of astronomical measurements that resemble the tables used to enforce copyright protection in old computer games. The orbital elements are published, Kilgore Trout-style, in dirty magazines such as the IAU's Minor Planet Electronic Circular. It is rawther difficult to use the IAU site to find the MPEC issue for a particular minor planet, but it's easy if you use a Google site: search. Eris's orbital elements were published in MPEC 2005-041, and they are as follows:

Paste that into Solar System Live and you'll see that Eris is currently in the general direction of Neptune, as seen in the accompanying graphic.

Except there are *eight* textbook planets!And much better than the golden apple is the Five Fingered Hand of Eris -- it fits with the other symbols.

I guess there are if your textbook is a wiki.