Sun Oct 28 2007 14:13 How Many Levels?: I was playing the 2D fan version of Portal and basically figured it had 40 levels. I was right. Then I wondered why I'd thought that. Probably something to do with the pacing as new game mechanics were introduced. But when I was a kid, puzzle games had 30 levels and then you had to register for two more sets of 30 because it was shareware. How many levels are in a typical video game that has a discrete number of levels?

I decided to do a semi-scientific test where I measured this by searching for game "X levels" and comparing the numbers of results. I did a few Google searches until I remembered that Google doesn't want my business for this. I switched to Yahoo!, which has a handy web search service.

According to that, most games have 10, 50, or 100 levels. 4 levels is also extremely common (though I think there's a lot of pollution there from things that have 4 levels, like malls). A number divisible by 10 or 5 is the most common, but you can plug in any small number of levels and find some oddball game (random example). 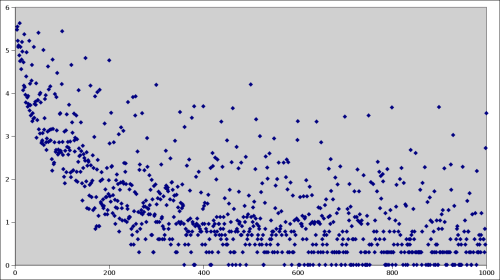 The left side of the graph is a "long tail" type graph, but there are very popular data points near round numbers. I also graphed X=1 to X=2000, again with a skip of 10. As we can see the adventure continues. Between 1900 and 2000 there's significant pollution from years ("returning to 1990 levels of greenhouse gas emissions"). 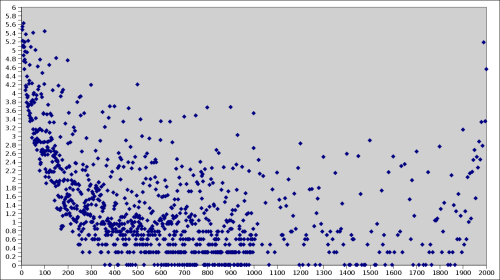 I collected data up to X=5000, but 2000 levels is really the limit of how many levels one entity can create for a specific "game", unless that entity be a computer generating them randomly. I don't think I've ever even seen a Rocks 'N' Diamonds level set that had more than 2000 levels. So I won't show you another graph. But if you want the raw data I put up a Gnumeric spreadsheet with my original graphs. Around 3500 there's a lot of financial crap from India for some reason ("support at 3575 levels from the past three trading sessions").

Random tidbit: judging from hits, the least popular number of levels 1-100 is 79. However, 46 stands out from its neighbors as being especially unpopular. Also mysterious: why is 80 more popular than 70?

(1) Sun Oct 28 2007 21:50: I was thinking of tracking science fiction in NYCB as it's stuck into Project Gutenberg, but then I remembered Free Speculative Fiction Online, which has the Gutenberg stuff and more, plus a syndication feed.

Spent the afternoon writing up Future Stuff entries, building up the backlog for yet another business trip next week. I hope y'all appreciate this, as this is very real time I could be spending playing roguelike games. We are approaching the two-thirds mark of Future Stuff, but still have many bizarre items left to go, like "Holograph Bifocal Contact Lenses", "The Vilest Taste", and "Edible Pet Spoon".