(9) Tue Dec 18 2007 17:09 Horrid Tragedy In Private Life: Oh, frabjous day. Short-time readers may recall back in July when I heard of an incomprehensible Punch cartoon drawn by W.M. Thackeray, a cartoon so bizarre that "[a] rival magazine helpfully offered five hundred pounds to anybody who could explain the drawing. Nobody could." Since then I've been on a cartoon-hunt (not really), and today I not only found the cartoon, I found out what it means! 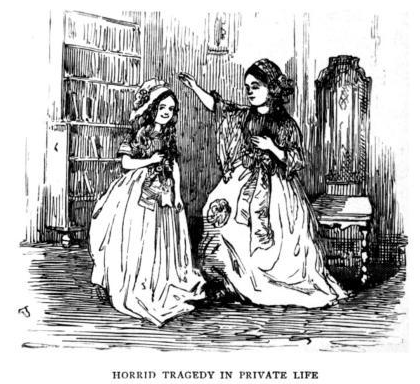 Instead of telling you what the cartoon means right now, I thought it would be fun to do some information scarcity reenactment and invite unfounded speculation as to what it means. Leave your theories in comments. I'll post an explanation tomorrow.

If you don't like not knowing something, it's not hard to find the canonical explanation once you know the title. I must warn you that, in the "Cow Tools" tradition, the explanation is quite the anticlimax. Meanwhile, I'll be perfecting my time machine to collect that five hundred pounds.