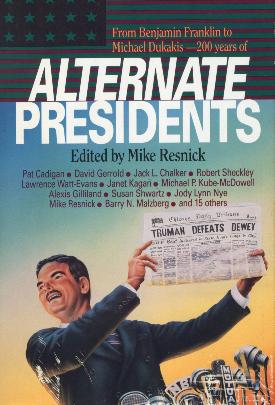 Sumana used to have this book of alt-history stories about if presidential elections had happened differently (occasionally very unrealistically; I think there was one where Victoria Chaflin Woodhull won in 1872). The stories were generally okay but what really stood out in my mind was the awesome cover (see enclosed). It's rare these days that you get a hardcore Thomas Dewey reference. Cover photo from the website of one of the authors anthologized.

In semirelated news, I'm having fun looking through the NYT archives for previous election years and comparing their campaign news to this year's. Around this time in 1996, I was in my first quarter of college and Bob Dole was campaigning in California after "a new Field Poll showing Mr. Clinton only 10 percentage points ahead." It's a genius plan, Bill Bradley doesn't say:

''Dole is confronted with pretty bad choices across the country, whether Ohio, Indiana or Florida or here,'' Mr. Bradley said. ''He won't win California, but a rip-roaring campaign in the last two weeks could save a half-dozen House seats and help the Republicans keep the Assembly, where they're in trouble.''

Also, this Clinton-seeking zinger from Bush in 1992: "I do think that you can't turn the White House into the Waffle House." It's funny because Waffle House is a terrible restaurant!

PS: fun Thomas Dewey fact: he was the Eliot Spitzer of his time, except without the prostitution scandals.