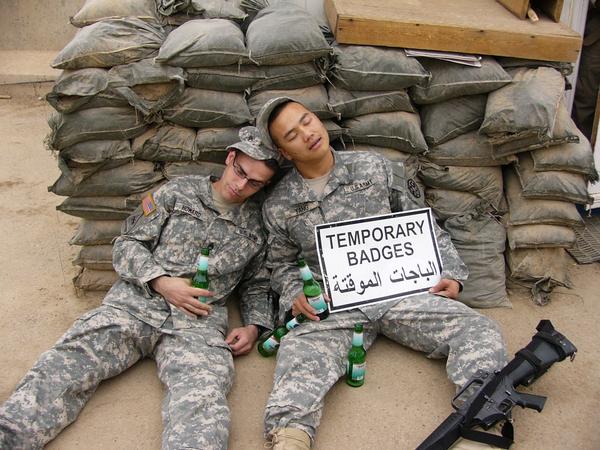 The image is from the Myspace page of Mike Howard (left), a friend of mine from Arvin High, taken during his tour of duty in Iraq. There were other, less ridiculous photos, but why choose one of those? I'd like to get back in touch with Mike but apparently not badly enough to create a Myspace account. Mike, if you see this, send me email.

A child, a child shivers in the cold
Let us bring him silver and gold

How about bringing him a blanket?

Wed Dec 24 2008 17:38 Beautiful Soup Progress #2: Another glorious vacation day squandered porting Beautiful Soup to Python 3 for you ungrateful sods! I have a script that runs 2to3-3.0 on the core codebase and applies a little patch of my own, and I've used it to fix almost all of the Unicode problems. We've still got some kind of problem with the search mechanism, and some problems with HTMLParser (?) differences involving how HTML entities and self-closing tags are handled between Python 2 and Python 3. I'm down to 15 failing tests in the converted code, without breaking any tests in the Python 2 version.

I think a couple people were confused by my earlier statement that you'd be able to "write a plugin for lxml [or] lib5html." I'm talking about using another parser to drive Beautiful Soup tree generation. Turning events generated by some other parser into a generic set of "start tag", "end tag" type events. Thus giving you an alternative to the okay-for-2004-but-not-for-2008 Beautiful Soup rules about parsing bad HTML, and eventually getting rid of those rules altogether, because I don't want to be in that business.

Wed Dec 24 2008 21:04: I just found out that Peter Hodgson, who's been showing up in NYCB for over ten years, is actually Peter Hodgson the Younger, son of the man who made Silly Putty into a product. Peter the Younger went around propagandizing it.

In 1961, he introduced Silly Putty to thousands of excited Soviets in Gorky Park. "They went absolutely nuts when they saw it," said Peter.

Wed Dec 24 2008 23:45 Christmas Chiptunes: This year everyone is a-twitter (and a-Twitter) about 8-Bit Jesus, the excellent album of Christmas carols done in the style of NES games, an album that has doubled in size since the last time I looked at its webpage. But if you can't bear to listen to music not synthesized by a 6502, it's not your only option.

A few years ago the twittering was about The 8bits of Christmas (that really does seem to be the best way to link to it; scroll down to "8bp038"). And this guy puts out a Christmas album every year. There's also this "8 Bit XMAS 2008" which actually comes on an NES cart. If you ask me the first two albums I linked to are the best, but nobody asks me these things.

Sumana listened to some of the music and said, "You won Christmas!"