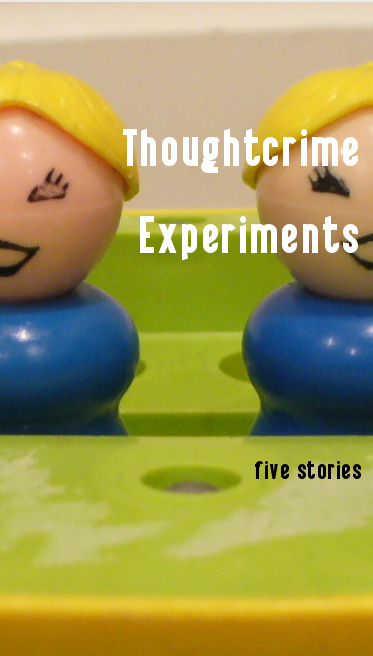 As my Christmas present to the Internet I'm soliciting submissions for a new speculative fiction anthology, Thoughtcrime Experiments. Sumana will read slush, I'll select and edit the stories, and we'll publish online under a Creative Commons license.

If you're a spec-fic writer, and there's some story that people you've shown it to have liked, but that you've been unable to find a publisher for, send it to me. If I like the story enough to spend $200 on it, I'll buy it for $200. I hope to buy five stories. Details at the anthology page. Rationale follows.

I've been in a writing group for over a year, and read about thirty stories and a novel because of it. I've mentioned before that half the stories are "a rewrite away from publication quality". What does that mean, really? It means I could easily imagine reading those fifteen stories in a magazine or anthology. But of those fifteen stories, there are only two I want to buy for three cents a word and publish myself.[0] It's different when it's your own money.

Thoughtcrime Experiments is an an experiment with my own money. How hard is it to find five stories that I really want to buy? Given those stories, how hard is it to put together an anthology people will want to read? At the tor.com holiday meetup I cornered Patrick Nielsen Hayden and John Joseph Adams, and asked them whether my plan was feasible.

My takeaway from those conversations is that the toughest part of putting together an anthology is A) getting some "name" writers to promise to contribute stories to anchor the anthology[1], and B) getting a publishing deal.[2] Well, I don't need either of those to consider this project a success, so let's do this. Send your best unpublished story to thoughtcrime.experiments@gmail.com. I'll start promoting this anthology more in the new year, when people come back from vacation and start paying attention again, but it's open for submissions now.

I'm also going to try to write a story for John's current anthology, "Federations", and a pro market wants me to do a rewrite on a different story (yes!). So, busy vacation.

[0] I think one of those stories has sold, as has the novel.

[1] At VPXI Elizabeth Bear told the story of how she broke into the relatively-big time by filling in for a name writer who'd flaked out on an anthology promise. And then eventually found herself being the name writer and flaking out on anthology promises of her own, leaving room for other up-and-coming writers.

[2] Anthology creation, at least the way John does it, seems like you nail down the name contributors, pitch the book to a publisher using the name writers as collateral, put everything together, send out the checks, and submit the manuscript. For some reason I always imagined someone at the publisher coming up with the anthology idea and gathering the stories. But it's more like a novel that you subcontract out.