In other futurism news, I recently remembered this 2000 Slashdot article from David Brin. "[T]hink about Global Warming, the Supreme Court and the Internet. You'll hold your nose and vote for Gore." 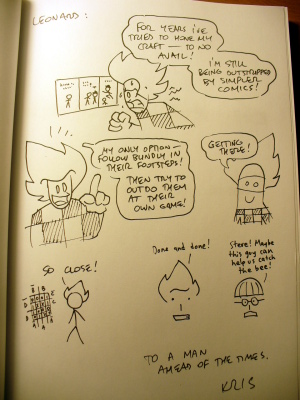 I got my copy of Kris's 1/4-masterpiece How To Make Webcomics delivered today, and it's got the best inscription ever! But the inscription needs some backstory.

When we were in college Kris and I drew cartoons for each other. Our best collaborative work was this tightly-plotted Captain Planet parody, but that was just the most elaborate of the hundreds of drawings that filled our notebooks. The only downside was that I couldn't actually draw. No worries. I developed a style that Kris recently described (in a forum topic about xkcd) as:

[A]bstracted heads floating on the page that were laid out like a comic strip (logically) but had no backgrounds, no props, no bodies, no nothing. Everything was built from this symbology... it conveys an image the way an engineer would want to convey it: with as few lines and as much clarity as possible.

Ascribing clarity to my drawings is pretty generous, but you get the idea. To show you, I've uploaded a couple computer-industry-themed ones I did for an aborted 1998 Crummy project: a decent one with RMS, and one about the Netscape source release (10 years ago today!) that has excellent awkward pacing. Plus here's one scanned right from my sketchbooks, the only one I have handy that shows how I drew Kris (in baseball cap with Starfleet pin).

For as long as I've known him Kris has been really good at adopting other peoples' styles and it was a thrill to see him adopt my own. Thanks, Kris!

Uh, the thing in the lower left corner is a Karnaugh map, boring bane of our undergraduate existence. I'm not sure about the reference to the bee, but I vaguely remember a comic where a bee got into Bill Gates' office. Oh, the book, you say? Haven't read it yet. Probably awesome.