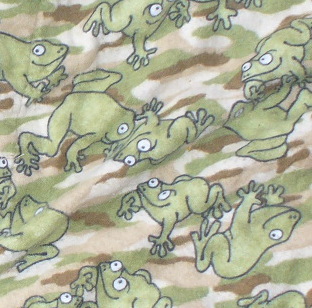 I'm pretty sure you don't read this weblog to learn about my underwear, but Susanna made me some excellent boxer shorts for my birthday, with cool fabric featuring frogs and penguins and whatnot.

(1) Fri Aug 08 2008 23:37: Sumana wanted me to write more about my emotional reaction to The Making of the Atomic Bomb. It's true: girls always want to talk about feelings. Look, it's a story about a war, a war that featured escalating levels of brutality until you had soldiers flying off with bombs every night to turn cities into the stereotypical image of hell. Meanwhile some of the most brilliant people of the time, including many of my intellectual heroes, were working on making it possible to deliver that much hell with a single device.

They knew what they were doing and they had self-justifications. One of the self-justifications was the then-new concept of deterrence: that the bomb was so terrible it could be used to prevent war altogether. But deterrence doesn't work on the abstract level; it works by specific nation-states threatening each other. The bomb did prevent total war, but it did this by making everyone's life into a constant low-level war. Bohr and others had some ideas of how to prevent this but nothing came of them.

The theory behind fission and fusion bombs is not difficult. I basically understand it, and I'm terrible at physics. What's difficult is getting enough fissionable uranium, which basically requires being a nation-state. I was amazed by the enormous industrial parks set up to create a few grams of U-235 a day, and by how easy it was to destroy the German bomb program by blowing up their only source of heavy water. Of course, nowadays (this is not in the book), you can just take an existing warhead from one of the poorly-secured post-Soviet stockpiles.

So, basically, the book is very depressing.