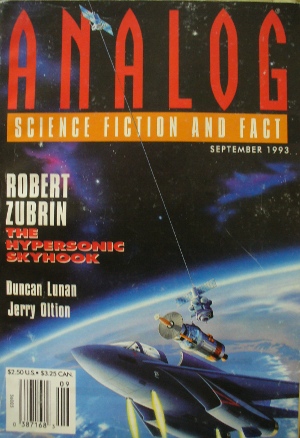 This was a really good issue. It starts off with a semi-famous Stan Schmidt essay, "Magic" (well, I'd read it before). There are two really good time-travel stories: W.R. Thompson's "The Plot to Save Hitler" and Duncan Lunan's "With Time Comes Concord", which name-checks Carl Sagan. (Update: Now that I think about it, it implies Carl Sagan would be alive in 1999, which would have been nice and was probably an act of optimism in 1993.)

There's also Bud Sparhawk's Jake's Gift, which is not the kind of story you imagine appearing in Analog, while simultaneously fulfilling your Analog-story stereotype to the highest degree: the story comes with a technical diagram, and once you see the diagram you say "oh, cool" and you don't need the story itself. Although Jerry Oltion's "Course Changes" isn't stupendous, I wouldn't kick it out of any metaphorical bed for eating metaphorical crackers. I was excited to see that Linda Nagata had a story in this issue ("Small Victories") but I didn't like the story very much.

No interesting ads, except for a color insert advertising a limited-edition Captain Picard collector's plate (by "Plate of the Year" artist Thomas Blackshear, who's still in business). The book review section has a positive review of Mostly Harmless, and mentions a probably-not-that-interesting story by Del Stone, Jr. with the very interesting title of "The Googleplex Comes and Goes." (Yes, "Google", not "Googol"; see contemporaneous complaint about the misspelling.)