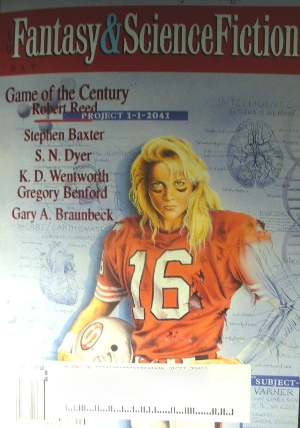 Doesn't seem that long ago, but this sucker's over ten years old. Man. Interesting side note: one of the authors in this issue submitted a story to Thoughtcrime Experiments. (It's not Steven Baxter.) Also, this has the busiest magazine cover I've ever seen; the background painting is absolutely covered in text.

Almost every story in this issue was good! The kind of story that I'd mention after mentioning the really good story. But there was no really good story. I guess my favorites were K.D. Wentworth's "The Embians" and Baxter's "Huddle" (not the story pictured on the cover). Gregory Benford's nonfiction essay mentions Burning Man and the Long Now Foundation, but I don't think 1999 is terribly ahead of the curve for either of those phenomena, so maybe it's not worth mentioning the mentions.

Two of the three cartoons were jokes about science, which is a pretty good ratio. The "Curiosities" section on the last page mentions a prequel to H.G. Wells' Little Wars called Floor Games. I'd never heard of this book before, but it sounds interesting, and it begins with the scrupulously accurate statement: "The jolliest indoor games for boys and girls demand a floor[.]"

Summary: nothing to make the sprit soar, but the only boring stories were very very short. I even liked most of the supernatural stuff. You could do a lot worse.

Thu Aug 27 2009 22:56: Susanna is transcribing a journal that my parents kept in the 1980s. My mother wrote in the journal fairly frequently, my father not very often. By now you know that he wrote postcards instead. On February 17th, 1985, he mentions the postcards in the journal:

Recognizing that my writings in this journal in recent years have been sparse, I must comment that my life has not been entirely undocumented. I have accumulated several hundred postcards — together with Frances, Leonard, Susanna, and Rachel — from our outings around town, our long-distance trips and my business trips. Many evenings in the hotel have found me writing postcards to my family and friends and also recording my own experiences on postcards. There are some I hope who will find them of some historical and biographical value — as well as lovely to look at.

Frances was not fond of the postcard idea at first, but has quit any opposition since she sees that I don’t leave them lying around — and on Wednesday night, when I put ready and put the children to bed, a regular activity is "looking at PC's" (post cards) when we pull a random handful from someone's collection, and reminisce about previous trips and outings.

Susanna and Leonard are very keen on this activity now and Rachel should soon be old enough to not bend the postcards. I think that my favorite is Susanna’s postcard of the Washington DC Dulles Airport. It was the first I sent her, and she slept with it and carried it around in her purse until I came home from Reston, Va. I now send each of the children a postcard when I send them, because they are all so special and they do appreciate them so.

This resurfaced a memory of Susanna carrying that postcard around everywhere. Susanna is going to start scanning her postcards and give them to me to put in the big pile, so maybe we'll see that incredibly worn postcard one day in the next few years.

I've quoted that first paragraph on the "Roy's Postcards" page. I'm glad to read confirmation that I'm doing something he would have liked. The tone here is extremely formal, even more formal than the postcards, which can get pretty darn formal. I don't know what's behind that voice. It's not the voice he used with his children.