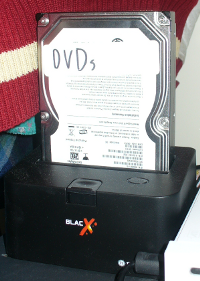 That is ridicu^WAWESOME.The next step is to build a hard-drive loading robot, like tape libraries have.More seriously, I wonder if in tossing around unprotected hard drives you'll start losing them to static, like the Very Serious Warning Labels always, well, warn.I've always just used white box computers as my storage enclosures. A $200 box can hold 4 hard drives (maybe more if you need it), and you get RAID/Ethernet/SATA instead of nothing/USB/ick. Requires an ethernet-wired closet to stick it in, though.

I always thought those anti-static wrist straps were a ruse.