(4) Mon Feb 16 2009 13:48 Thoughtcrime Experiments Lab Report #1: OK, Thoughtcrime Experiments is closed to submissions, and it's time to buy some stories. As an appendix to the anthology I'm going to publish an essay about the process. This has been a really good and interesting experience for Sumana and me. And although it's been extremely time-consuming, so far it's not been difficult.

When you're a writer, even a writer in a writing group, you only have a small picture of the market. Editing this anthology is giving me a much wider view, and it's also making me a better writer. So basically, if you have the time, I think you should liberate some stories and put out your own anthology.

On the TE website I say that TE is an experiment "to see how difficult it is to find five stories I like enough to buy." This is true enough, but it's only part of the story. As in any experiment involving human beings, the subjects (you) were not told the full purpose of the experiment. The goal of Thoughtcrime Experiments is to test the truth of certain things I've been told about the market for short science fiction. I don't yet have the data to talk about this in more detail, but I do have some raw numbers and some initial impressions, which I'll share with you.

This graph shows submissions per day. 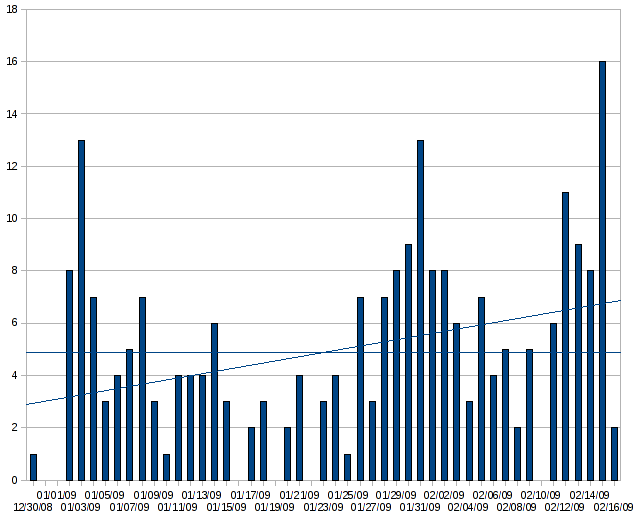 Was it enough? Enough to get five really good stories? We don't have all the data on subjectively determined story quality--we still have to evaluate 25 stories starting from the 14th--so I can't put up a graph right now, but the answer is yes. About twenty of the 215 submissions we've evaluated are stories Sumana and I have a positive desire to publish--not "someone else might like this", not "could be great with some work", not "could go in if we don't get anything better." Damn good stories that need some minor edits or a thousand words cut, if anything.

In one sense, that's a very small number--about ten percent. But it's much higher than what editors' horror stories had led me to believe. I was expecting a deluge of random crap from crazy people written in HTML crayon, hilariously bad Eye of Argon type stories, stories that had been sitting in the author's desk drawer for twenty years. In actual fact we got one crazy person, one Argon-class story, and near as I can tell one desk-drawer story (and it was pretty good!).

In maybe a week, once we've got all the stories evaluated, I'll put up more objective data on our impressions of the stories (which are of course, subjective; I mean "objective" in the sense that there will be graphs).

Oh, another thing I didn't tell you. The anthology will have art! We went to some of our favorite artists and told them, basically, "draw something awesome." It's still in flux so I don't know how many pieces there will be, but we're hoping for at least five, and we've already bought finished pieces from Internet faves Patrick Farley and Erin Ptah. Unfortunately a number of my other Internet faves were too busy or didn't respond. (Josh Lesnick, if you read this, there's still time!) But the stuff we've commissioned already will BLOW YOU AWAY. Or, more accurately, will DEPICT YOU BEING BLOWN AWAY.

PS: Props to the friend of ours who sent us a story in LaTeX format.

(1) Mon Feb 16 2009 17:13 Wandernonlust: Every few months I go for a long walk around the neighborhood looking for cool new things. There wasn't much new, but I did notice some bizarre things: