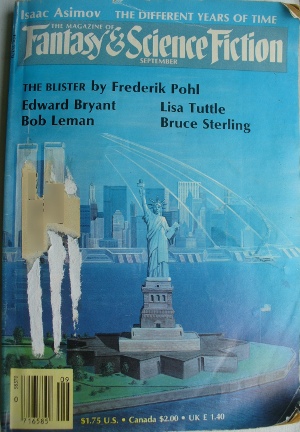 It's been a long time since I did one of these, because I was trying to cut down on the unread books and I wasn't counting magazines as unread books. But now I'm back to reading these old science fiction magazines I got last May. Since my last review of this kind I've had to go through a real slush pile, and I'm no longer in the mood to analyze why I found a forgettable story forgettable. So I'm just gonna tell you what in this magazine is worth reading. I know I said things like this before but this time I mean it.

You might like the cover if you're interested in old SF depictions of the World Trade Center. In fact you might also like Frederik Pohl's "The Blister", which dares to predict the changes to unionized labor in New York once they cover Manhattan with the big dome they're always threatening to cover Manhattan with in these stories.

Up-and-comer Bruce Sterling has a decent possibly-no-fantastic-element story with "Telliamed", and Nebula nominee Bob Leman has the creepy Portal-esque "Instructions" ("We will now tell you that we lied in Instruction 11. There was in fact danger in Area Two.") which I really liked until the disappointing fake-Lovecraft ending.

Harlan Ellison has a bunch of movie reviews. He loved Splash, and speaks about Ron Howard (director) and Tom Hanks as though they were newcomers with something to prove, so maybe that was the movie that made their names. His initial impression of Star Trek III is "seems less interesting than ST II", even though a year later he says he disliked Khan and seems to have developed a grudging respect for The Search For Spock. He really loves The Quest and Iceman, two movies I've never heard of and The Quest doesn't even show up in IMDB despite having been written by Ray Bradbury and co-directed by Saul Bass.

Oh, there's a cartoon by Joseph Farris that, amazingly, has a small SF/fantasy element and is pretty funny. Finally, there's a horror story "Redcap" by Lisa Tuttle that I intensely disliked the way I intensely dislike horror stories (Who could the killer be? Could it be the only other character in the story?!?!), but I mention it because at the end is a great pre-Web example of unfortunate content/ad juxtaposition.