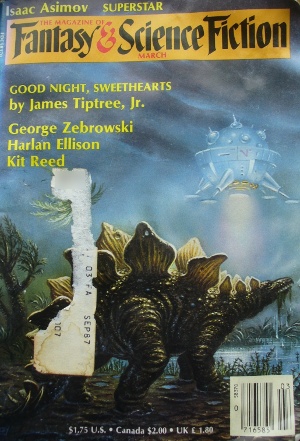 A good issue, but the whole time I was reading, I was waiting for the story that fulfilled the promise of the cover. A spaceship landing (or, I suppose, taking off) near a stegosaur! Which story would it be? "Good Night, Sweethearts" by James Tiptree Jr.? "Still Life" by David S. Garnett? Probably not "The Dog of Truth" by Kit Reed. Well, I'm at the end of the magazine, by process of elimination it's gotta be "Sea Change" by Scott Baker. But no, it was just a misleading cover image that has nothing to do with any story in the magazine. Oh well.

I think the best story is "Sea Change", despite the stegosaurus disappointment. Although it has a little too much of a "I went on vacation and had a really evocative experience, so I wrote a story" feel. So maybe the Tiptree is the best. They're both very good.

Also recommended are Karen Joy Fowler's "Wild Boys", and Neil W. Hiller's "Peace Feelers", in which invading aliens have the same military structure as the US Army. (Points deducted for puns.) It's always strange to be on the New York subway reading about someone trying to blow up the New York subway.

Paul Di Filippo's "Skintwister" and David S. Garnett's "Still Life" are both the "eternal youth is possible but only for the rich--and at what cost?" story that was written a lot in the 80s, or maybe is written a lot by writers approaching middle age.

George Zebrowski is now officially my "writer whose work I find compelling when described but disappointing when I read it." He's got a story about semidecidability called "Gödel's Doom" (originally printed in Popular Computing!), but the story just can't happen. The Incompleteness Theorem says it can't happen. The author knows this. The characters in the story know this. They spend much of the story exchanging dialogue: "The Incompleteness Theorem says this can't happen!" "But what if it can?" And in the end it happens and makes no sense and is boring. Ted Chiang did it better ("Division by Zero").

On the plus side, because of "Gödel's Doom" I found MathFiction, which lists fiction about math and critiques the math. Here's its get-off-my-lawn page about "Gödel's Doom". Here's 29 more works of fiction that involve Gödel somehow. MathFiction also loves "Division By Zero".

In movie reviews, Harlan Ellison can't shut up about how great Brazil is (or, indeed, anything). It's an enjoyable column. Algys Burdis's book review column contains a review of Schismatrix and The Postman, which I just read. (3/4 kickass adventure, 1/4 David Brin's cranky blog!) Also the phrase "Now, Bruce Sterling is what they have begun calling a 'cyberpunk'", and these two footnotes:

*Someday if they don't stop giving Brin awards and money long enough to edit him properly, he, his publishers and we his readers will all lose. The initial burst of charming and/or socially praiseworthy ideas will have slackened a little, the need for a better grasp of storytelling per se will make itself felt, and Brin, like many another bright young star before him, will be left wondering where his career has gone. This will be a notable shame, in his case.

*At this point, I began picturing [Philip K.] Dick as a squid among the stars grappling Arthur C. Clarke's whale from Childhood's End. Fortunately, in most realities this footnote does not exist.

A great issue, & my favorite of any issue of Fantasy & Science Fiction, Analog, or Asimov's I've *ever* read.

Spoiler: "Flying Over Water" by Ellen Klages (in the collection Portable Childhoods) ends *a lot* like Baker's "Sea Change".

this makes me feel i have lived the experience of reading f&sf, oh yes.

I threw out this, along with about five more years of F&SF last August when I moved. They had sort of bled into each other in a fungal dustbunny mass which was just too disgusting to contemplate, and I refused to bring 'em with me this time.I'm not really sure why I stuck with the magazine for as long as I did. Short-form SF was dying by the early Eighties, and F&SF never could decide if it was a horror mag or an SFnal sort of joint. Way too much pointless literary beardmuttering. There was usually *something* worthwhile, if it was only Ellison having yet another over-adjectivized hissy-fit about his hated auteur-directors.