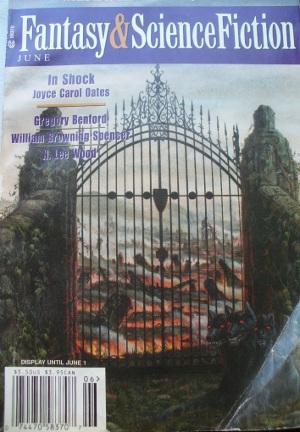 RoOSFM returns! Because I was near the end of a huge book (The Structure of the Cosmos, which is great) and didn't want to take it on the subway. Here we go!

There is some quality stuff in this issue, though "The Birthday of the World" by Ursula K. Le Guin and "In Shock" by Joyce Carol Oates (!) both start out slow. I recommend reading the first section of N. Lee Wood's "Three Merry Pranksters at the Louvre" as a non-genre story, and skipping the rest. My favorite story in the magazine was Chris Willrich's "The Thief With Two Deaths"--like a Discworld story written by someone with a completely different sense of humor from Terry Pratchett. The shorter pieces are forgettable, but just in terms of word count, most of the fiction in the magazine is good.

I also think this is the first old SF magazine I've ever reviewed to have good cartoons. By which I generally mean "New Yorker-quality cartoons that were rejected because they were too fantastical for The New Yorker." There's also an amazing cartoon in this issue, one that I think I or Sumana mentioned a while back but couldn't find. Here it is. That's by New Yorker staff cartoonist Tom Cheney--not Dick Cheney, as you might think. Actually three of the four cartoons in this issue are his; I guess he's a cut above.

In his science column Gregory Benford talks un-scientifically about how great Southern California is (which it is), and demonstrates that even talented science fiction writers can't write good science fiction and explicit futurism at the same time. (Why are people going to the mall to buy e-books?) There are some funny Hollywood-lunacy stories a la An Evening With Kevin Smith.

I've come to terms with this genre of kitsch--crystal dragons with semiprecious stones for eyes, pewter wizards holding glass orbs. But clocks? Clocks are SCIENCE!