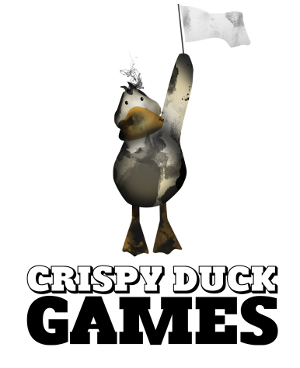 Here you see the logo for Crispy Duck Games, one of the fictional studios in my novel Constellation Games (coming soon!). It's the first reward I've gotten out of July's Month of Kickstarter project. (Thanks, Brandon Eck; I didn't tell you anything except the name of the company, but you came up with something funny and appropriate.) Now that all the Kickstarter projects I backed have passed their deadlines, I'm going to take a graph-filled look at how they did, and take a few tiny stabs at guidelines for future projects that use Kickstarter or the Street Performer Protocol more generally.

This is not a random sample of Kickstarter projects. I picked projects I actually wanted to back.

I think this shows good judgment on my part: I usually backed projects the day they started, and I avoided projects like MC Frontalot's music video that were obviously going to make their goal (or I backed them and didn't count them towards MoK.)

I pledged at least $25 to each project, and more if necessary to get a cool reward, so my total expenditure was at least $725, and probably closer to $900.

This graph shows how much money each project raised. The line is the success line: projects on or above the line met their goals, and projects below the line failed. Let's zoom in on the projects that failed: Check that out. Most failed projects raised pretty much nothing. But many raised thousands of dollars but didn't get any of it. If the cheese vat project had asked for $3k instead of $20k, they could have made their goal, and still been able to produce all their prizes. They wouldn't have gotten a new cheese vat, but $3k is better than nothing.

Why do projects fail?

I looked at the failed projects and came up with four classes of failure. These are my subjective opinions about what went wrong with the projects.

Not shown: a much larger population of failed projects that I didn't back, which may have failed for other reasons.

What is the hustle?

How can I judge projects based on a vague quantity like "hustle"? I'm using the number of updates posted to the Kickstarter project as a very weak indicator of hustle. Here's a graph of updates versus backers, for all projects. Kickstarter updates do not cause backers, if only because nobody but existing backers cares about your updates. But in my dataset, no project with zero updates ever got more than 50 backers. Updates and backers are both signs of this invisible third thing, "hustle". Updates are a good indicator that the project founder is hustling. Many update messages are exhortations to existing backers, asking them to propagate the project through their social networks.

It's quite possible to hustle and fail anyway. But if you don't find yourself writing some updates, it's a sign of a problem with your strategy.

Here's a big difference between successful projects and failed projects. The mean mean contribution to a successful project is $76. That is, dividing the number of contributors by the money raised gives a certain number, and the mean of those numbers is $76. The median mean is $66. The standard deviation of the means is a huge $39, but I don't know if that has any statistical meaning.

(CAUTION: Sumana finds these graphs confusing, because the x-axis doesn't mean anything. It's just all the projects lined up next to each other. But I couldn't think of a better way to present this information.) I was pretty shocked about this. Even the numbers for failed projects greatly overshadow the $25 I usually kicked in (and still usually kick in). However, for a lot of board game projects, I contributed $40 or $50, because that was how much you had to contribute to get a copy of the game, and all those projects succeeded.

I'm a little loath to do this because it means a bunch more data entry, but I want to take a closer look at at least one of these projects, to figure out what "hustle" looks like in more detail. There's one MoK project that for me just defines "hustle", a project that reached a really high goal with a mean backer contribution of only $23. I figure that's a good one to investigate more closely. So stay tuned, or not.

I love that you used the word "hustle." Also, Crispy Duck Games is awesome.

Great analysis. Though I disagree with one point: that raising a fraction of the goal is better than nothing. For many projects, raising 10-40% of their goal would be far worse than raising nothing at all... They'd be on the hook to fulfill rewards to backers, but without nearly enough money to produce the project.The all-or-nothing mechanic is a huge feature of Kickstarter that occasionally gets written off as a flaw. But in my opinion, it's key to the success of the site. It drives backers to spread the word, and the only thing that's lost if the goal isn't met is the creator's time.

Raising a fraction of the goal is better than nothing *if you can still deliver the prizes*. I'm just saying some people asked for too much money.

Yeah, I always recommend raising the minimum required to do the project and get it off the ground, plus a little to make it worth your time. I'm guessing some people just get greedy.