(8) Tue Jan 10 2012 11:42 Hostile Witness: The Vechs Interview: Minecraft can be a tough game. The controls are kind of blocky, the best resources are hidden deep in the map alongside deadly lava rivers, and the night hosts monsters that will kill you just as soon as look at you (or, in one case, just as soon as you look at them). But it's not that tough. All that terrain is generated by algorithm. It's not like the random number generator is trying to kill you. 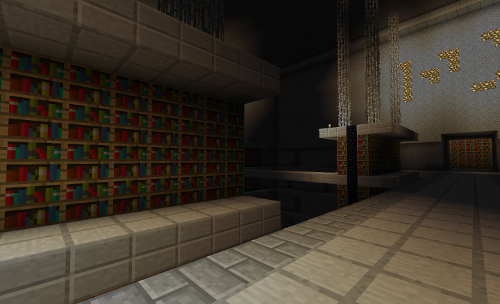 But there's this guy named Vechs who is trying to kill you. His "Super Hostile" series of custom Minecraft maps offer challenges that prohibit or subvert every survival strategy you learned in vanilla Minecraft. Even in his easier maps you'll find bottomless pits, world-spanning ceilings that block Minecraft's all-important sunlight, swarms of monsters pouring from hacked spawners, and TNT in unfortunate places. Just getting your first tree is a challenge. Complete a Super Hostile map, and vanilla Minecraft will seem easy.

But Vechs' maps are not just tough: they're creative, fun to play, and they look great. Vechs uses landscape features and lighting to grab the player's attention, direct the flow and pacing of their playthrough, and give them a spectacular environment to build in once they've conquered the map.

I've raved about Super Hostile a couple times before here on NYCB, but with the release of "Spellbound Caves", the tenth entry in the series, I knew it was time to get serious. I sat down with Vechs (I assume he was sitting down, anyway) and interviewed him over minecraftforum.net's private message feature. My goal was to pick up where this interview from July 2011 left off, with in-depth questions about his style and his mapmaking wish-list. The interview contains some Minecraft jargon, but anyone with an interest in game design should get something out of it.

Leonard: You play a kind of character on your maps, an angry trickster god who hates his players and taunts them by writing things on signs. But clearly you're not actually like that. I've played maps made by people who really did hate me, who wanted me to farm cobblestone for an hour or dig through obsidian without a tool, and I said "screw this" and quit the map. I don't think you'd ever do that, right? What's the difference between you and the "Vechs" in your maps?

Vechs: It has to do with challenge. There is a difference between making the player use skill or ingenuity, and making the player do something tedious. Sometimes a solution to an area can involve using lots of blocks (Like the player making a cobblestone tube for them to safely move through.), but these are usually just one option of many the player can use to conquer an area.

Sometimes the "Vechs character" in my maps is pretty mean, and just downright spiteful, especially when it comes to traps. In real life, I'm not like that at all.

In the Obsidian Block interview you say that you recently graduated from college and are looking for a career as a game designer or world designer. What did you study in college?

I am a Media Arts major. I studied everything from digital image editing, video editing, to stage lighting, to writing scripts and screenplays for movies, and more. I'm glad to have a diverse background, even though my passion is still game design.

What would be your ideal job? Would you rather work on a big-budget project with high production values, or an indie project where you have more creative control?

My first choice would actually be to have my own studio and bring to life some of the game ideas I have. One idea I've had for a while, and as far as I know, nobody has ever made a game like it. I wouldn't mind making it all myself, but that means I would have to re-learn a lot of programming. I've programmed some text-based games in C++, but programming is not my main forte.

That said, I also wouldn't mind working for a major company. Like, for example, Valve. Love those guys.

What other games have you made maps for? You mention Duke Nukem 3D in the Obsidian Block interview; what else?

Are you currently making maps for any games other than Minecraft?

At this moment, no, but I have been meaning to make some maps for Team Fortress 2.

Have you ever heard of ZZT or Megazeux, or am I just incredibly old?

You're old! *grins* I looked them up, and I think my version of that would be the RPG-series of game engines. 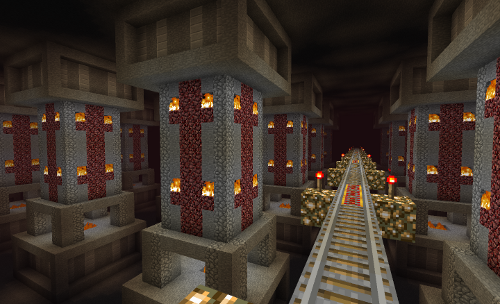 There are a lot of memorable set pieces in the Super Hostile series. Now that you've put out ten maps, would you mind taking a look back and sharing some of your favorites?

The first 15 minutes on just about any of my maps. I love that feeling of just starting off and scrambling for resources. I like the rail station in "Sea of Flame II", and how it goes out in the area with the huge pillars, and "Spellbound Caves" is just full of nice vistas and "scripted" events.

Most of my maps feature at least one "death fortress" as an end-game area. These are intended to be where the player gets to use all the resources and items he has been collecting through the whole map. TNT, lava, swords, bow and arrow, even TNT cannons... bring your whole arsenal and have some fun!

Can you describe the evolution of your design philosophy over the course of the series?

Try to improve in at least one area every time I make a new map. Push the Minecraft engine to its limits. Make an awesome and memorable experience for the player.

What are the biggest challenges in re-balancing Super Hostile for Minecraft 1.0?

Does 1.0 have anything to do with the fact that you recently flattened the difficulty levels in your map descriptions, so that "Sunburn Islands" and "Legendary" are now both considered "Easy"?

Yes and no. I feel that recently I have been drifting away from the theme of "Super Hostile" and I want to get back to my roots. Being able to respawn forever, over and over kind of takes the risk out of a map. Even in "Legendary", unless you really mess up and drop all the wool in lava or something, you can just set your bed spawn near an area, and try over and over until you get it right. I think that's pretty Easy on the player, even if the area you are attempting is challenging.

Call me nostalgic, but I kind of miss (sometimes) the GAME OVER screens from older video games. Modern video games, in the name of convenience, typically feature unlimited lives, save games, checkpoints, the works. But beating a modern video game, I have to admit, is much less satisfying than beating some of those old NES games. You can just bang your head against the game until you get lucky and get through an area. Heh, man this makes me feel old! "In my day, we didn't have all those checkpoints! We had three lives! One hit deaths! And we were happy!" *shakes cane*

Anyway, I do think this is a legitimate point of concern on modern game design, is risk versus reward. It is possible to make games so easy that they are very unsatisfying...

I'm an admirer of your ability to create new genres of map. Have you made experimental Minecraft maps that just didn't work? What's in your "abandoned projects" folder?

The only thing I've actually stopped on, is "Race for Wool #3: Common Ground". Because it basically became "Capture the Wool". 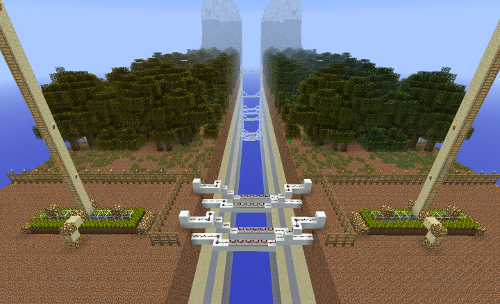 Have you ever made maps for a game that featured scriptable events? If so, do you miss that capability in Minecraft?

I have used C++ to code some text-based games. I have also used various scripting languages in the process of making mods or making my own games with existing engines. You do have some limited "scripting" ability in Minecraft, using redstone. Check out the Rumbling Caverns in my tenth map and you will see what I mean. :)

What would you like to see added to Minecraft? On your forum thread you mention that you'd like to add sharks and underwater plants to "Endless Deep". What else?

Bow enchantments... more mining enchantments, such as area mining. Check out episodes 04 and 05 of my Spellbound Caves Dev Commentary.

I think these enchants for bows would make bow combat much, much more fun. It's currently fairly slow paced, and a bit boring. Imagine a bow with Toxic, Piercing, and Phantom Spreadshot on it! It would be so much fun to shoot groups of enemies with a bow like that.

You have a creative relationship with some of the people who do Let's Play videos of your maps. It's a kind of relationship I've never seen before: the way people play your maps in public affects the way you design later maps. How did these relationships develop?

Very organically. Zisteau agreed to LP my very first map, "Sea of Flames" version 1.0, and ever since then, he's been involved in playing my maps, and giving feedback.

There's a very clever trap in "Spellbound Caves", [location redacted]. It's clever for many reasons, but I'm asking about it because it doesn't seem to have any triggering mechanism. I went in afterwards and took the walls apart and couldn't figure out how it works. What's the secret? Or is there a pressure plate somewhere that I missed?

POSTSCRIPT: With my interviewee uncooperative, I had no choice but to load a fresh version of "Spellbound Caves" into an editor to get to the bottom of the mystery. What I found was a trigger that did not shock me to the core of my being. But it is a cool design.

The trigger is a proximity sensor: a shaft behind a wall, with a creeper spawner at the top of the shaft and a pressure plate at the bottom. When the player gets within 16 blocks of the spawner, it activates and spawns a creeper, which drops onto the pressure plate, triggering the trap. The resulting explosion obliterates both creeper and spawner, leaving no trace of the trigger.

And that's what you get with Vechs' maps: MacGyver-like use of everything the game engine provides, to create confounding and unexpected effects. Seriously, game studios: hire this guy. Everyone else: play his maps.

PPS: Hey, people from minecraftforums.net, thanks for coming over. I've written other articles about Minecraft (1 2 3 4), and if you like my stuff, you might want to check out my novel about alien video games.

Good to see you getting the recognition you deserve. Cheers

Really great interview. Thanks for doing this.

Nice interview, keep it up mate

i know what trap he is talking about and i know how it works but I'm keeping it a secret as well xD
Hint: its in rumbling caverns

Did you really not find the creeper spawner?
Once you dig into the wall the pistons and redstone are pretty obvious, then you just have to follow the wiring and you find it.
The trap killed me, so as a "revenge" I built a creeper xp farm out of it *lol*

That proximity trap, was it Vechs' original idea or a copy of Etho's design?