(4) Sat Mar 03 2012 09:59 No Sirens On Titan: Recently I read a 2001 book by Jeffrey Kluger, Moon Hunters, about unmanned missions to non-planetary Solar System bodies. It was a little out of date but there was a lot of good early stuff, like how every time one of the Ranger missions failed, Khrushchev would use it as a laugh line in a speech. ("The Soviet pennant on the moon has been awaiting an American pennant for a long time. It is starting to become lonesome.")

And the book's its very out-of-dateness reminded me of something I'd forgotten about. The Cassini probe was launched when I was in college (I remember a flyer for an anti-Cassini protest at JPL, the point being that Cassini might explode on the launchpad like a Ranger and contaminate Cape Canaveral with radioactivity), and in Moon Hunters it's on its way to Saturn. But now it's there, like a jump cut!

And (this is the part I'd forgotten) Cassini included a probe, Huygens, whose job it was to land on Titan. That's why it was always called "Cassini-Huygens" on the news. It wasn't just NASA and ESA fighting over the name of the mission. And Huygens was instrumented with a microphone. Wow!

So I went to the Internet looking for the microphone data, and I was not disappointed. By that I mean: I found some sound files. The Planetary Society offers 'sounds from the Huygens "Microphone"', and those quote marks should be a clue as to how this is going to turn out. This semi-technical description of the Acoustic Sensor Unit explains all: the "microphone" is part of a set of instruments that examined Titan's atmosphere during the descent. It's designed to detect a thunderstorm. It takes a sample once every two seconds, and its share of the Huygens bandwidth is a measly 480 bits per second. It's basically taking Polaroid pictures of the ambient sound—not something the human sense of hearing can deal with. 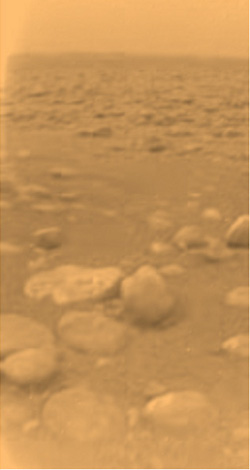 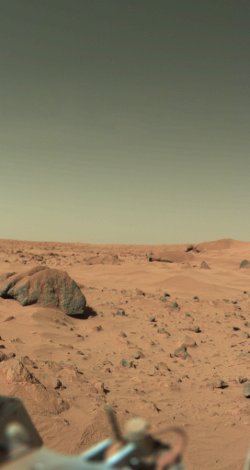 But the Planetary Society gamely processed the data into sound files approximating what you would hear if the microphone was much better. And... it sounds like wind, because Huygens is falling through atmosphere. No thunderstorms. There are files reconstructed from the data recorded while Huygens was sitting on the surface. (Well, it's still sitting on the surface, but from back when the battery worked.) Unfortunately, according to Peter Falkner of ESA, "all the sound we can hear is likely internal to the microphone."

So in terms of the gee-whiz factor, the microphone is a bit of a bust. It doesn't help that Huygens's only visible-light image from Titan's surface looks like a daguerreotype of Mars (see comparison). No wonder I forgot all about Huygens. As an antidote, I recommend Cassini's amazing photos of Titan from orbit, including radar images of the hydrocarbon lakes.

This wasn't the Planetary Society's first venture into astroacoustics. In the 1990s, three Berkley scientists developed "The Mars Microphone", an actual human-ear-like microphone that would work on Mars. Unfortunately it went to Mars with the Mars Polar Lander, which was lost during landing. Another Mars Microphone was supposed to go on the ESA Netlander mission, but that mission was canceled for being too expensive.

The Phoenix lander had a Huygens-like low-resolution microphone as part of its Mars Descent Imager, but (I'm synthesizing contradictory reports here) MARDI was not turned on during descent because it could have screwed up the landing. The MARDI microphone was turned on after landing, but no data was received.

It's a legacy of heroic striving towards almost certain disappointment, but there's another MARDI on the Mars Science Laboratory, so let's check back in August.

Maggie and I read all about the moons of Saturn yesterday! I thought maybe she wasn't into Space like you (just dinosaurs and Lego) but apparently she was just too young, because now she picked out the space books herself and begged me to read them.

"Contradictory reports!" "It wasn't turned on, but then it was, but there wasn't any data!" See, this is how conspiracy theories start.

The reports are both from Malin Space Science Systems, manufacturers of MARDI. This report from 2007 relays the news that the controllers won't be turning on MARDI during descent, and gives a good explanation of the problem.

And then on their project page for MARDI it says they did turn on the microphone after landing, in 2008, but got no data. I can't find another source for this.

Not really contradictory, just confusing. I guess the only possible contradiction is between the Malin project page and Wikipedia, which says "nor was the internal microphone used" and cites the 2007 report.

I remember watching the Huygens descent live on NASA TV (well, mostly watching people standing around consoles at the control centre in Darmstadt, but it was still exciting).