Wed Apr 04 2012 14:27 TUNS: For a while I've been gathering cool space-themed pictures to illustrate the Constellation Games commentary, but there's way more and they're way more varied than I need. Rather than abandoning this embarrassment of visual riches, I recently started posting a couple pictures a day to my microblog using the hashtag #retrorocket, so named because I mostly focus on cool-looking old tech and people working with or building it.

At the risk of revealing all my secrets, I'm getting the #retrorocket pictures by harvesting the Internet Archive's NASA Images site, one year at a time. I've combed through 1969-1988, and my technique will break down around 1994, when there start to be thousands of pictures for each year (even 1969 wasn't that bad). But 1994 is not all that retro, really, is it? Yeah, it's kinda retro. 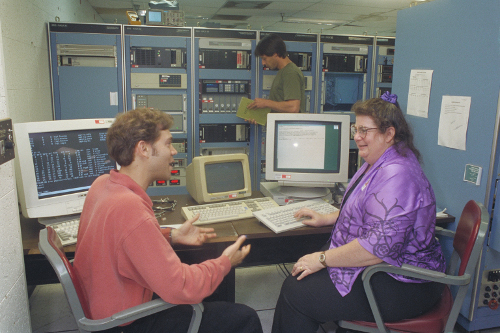 Despite the name, NASA Images has a lot of non-images: mainly movies and technical documents. Recently one tech document caught my eye: Technology Utilization Network System, a 1987 document laying out NASA's recommendations for off-the-shelf PC hardware and software.

This document pulls no punches, naming brand names, presenting huge benchmark tables, and spelling out just what it takes to outfit an effective mid-80s networked office on the taxpayer's dime. This is a time before Windows, in an office environment without Unix. Let's take a look at this document and see which products have the Right Stuff, and which fizzle on the launch pad. (n.b. Entertainment Weekly didn't want this for some reason, and I'm too lazy to change the segue.)

The use as a workstation of one of the newer 386 machines (based on the Intel 80386 CPU chip) is not currently recommended. The power provided by the 386 system is more than that required of the workstation.

Unlike a lot of offices in 1987, NASA understands the importance of networking. That's why each workstation is fitted with a 3Com Etherlink card ($451) and connected to a local file server running Novell Advanced Netware/286. Netware wins out over now-obscure competitors like 3Com's 3+ Share, Banyon VINES/286, Fox 10-net, and Lee Data's LANMASTER. The Internet stack is not even considered: I'm sure NASA's scientific installations are on the Internet by now, but it's not really an option for IBM PCs, and the term "intranet" doesn't exist.

The Compaq 286 used for workstations can also act as the file server on a small LAN. But for a larger LAN, you do need to buy that 386, and for the really big installations, it's got to be "a Novell T286B with a 183 Mb of hard drive space". And remember to buy name-brand:

Although many vendors claim to sell "AT clones," ISN has occasionally found very subtle differences in the performance of these "clones," which may result in problems during system integration.

For connecting to external sites and databases, each workstation is outfitted with a Hayes Smartmodem 2400 at $579.

ISN does not recommend installation of 9600 baud modems at this point. The lack of standard protocols, error-correction methods and data compression techniques for 9600 baud communications means that two modems from different vendors will rarely communicate with each other at 9600 baud. 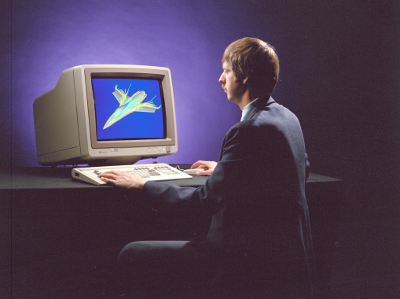 Printer time! TUNS spells out recommendations for cheapo dot-matrix printers (the Epson FX-286e, $527), letter-quality daisywheel printers (the Diablo D80IF, $1523), and laser printers for impressing the boss (the HP Laserjet Series II, $1795). Note that the most expensive printer is half the price of the workstation PC.

Two printers, the Brother Twinwriter 5 and the Fortis DH-45, include both dot-matrix and daisy-wheel print mechanisms. The two companies are actually marketing the same printer under different labels. Although this printer was initially viewed as an exciting combination of functionality at a reasonable price, it was excluded from further consideration after the Twinwriter 5 vendor reported extremely poor reliability and great customer dissatisfaction.

But they choose Unify, a database I've never heard of, over 80s heavyweights like dBase and Clipper. Why? Because Unity just has more stuff, like a C library.

Oracle was eliminated as a possibility because a LAN version of the software, although in development for some time, is still not available.

Each 286 workstation is loaded with about $100 worth of utilities: Popular ones like Sidekick and Norton Utilities, as well as some more obscure ones: "Sideways to aid in the printing of large spreadsheets; ScreenSave to protect the life of the monitors; KeyBuffer to allow the user to enter characters from the keyboard at a faster rate than acceptable under DOS; and FilePath to aid in the use of multiple directories and sub-directories."

But the best part of the whole document is the section on email. The document identifies a large number of requirements for an email system, such as:

The sender must be able to identify a single recipient, multiple recipients, and a "group" mailcode consisting of multiple mail identification codes but addressed as one unit.

And then presents a huge table comparing the competitors (again, Internet email is not even on the radar). And then decides to just keep using "the NASAMAIL system currently available throughout NASA." NASAMAIL was actually an installation of Sprint Telemail, which you can read a little more about in RFC 1168, including a mention of a Telemail-Internet mail gateway at NASA Ames.

It's a little odd that hardware of this description almost never shows up in the NASA Images archive! (I did see one mid-80s IBM PC sitting on someone's desk, but when I went back to look for it as an illustration I couldn't find it.) I think these recommendations were mostly for clerical workers and managers, and that the engineers and scientists (who show up quite a bit in the archive) used minicomputers, Unix workstations, and mainframes into the 90s.

I'm probably not gonna go through any more of these documents in any detail, but here are two others I found really interesting: the public affairs plan for STS-1, the first Space Shuttle flight, and the original press kit for Apollo 13.