(1) Tue Jun 05 2012 09:40 Constellation Games Author Commentary #28, "Someone Is Wrong On The Outernet": I found this little sketch I did for Sumana during the second draft, when I first completed the chapter with Ariel and Tetsuo playing Temple Sphere. It shows the Tool of Justice guardian-caste strapped into his cockpit, upset about Tetsuo having landed on top of his ship. It also invites Sumana to enjoy peanut butter cookies. I invite you to enjoy peanut butter cookies as well, but I don't have any prepared. Instead I made you a Twitter archive, and this commentary. The spoiler thread from last week is still open, but no one's posted to it, so perhaps the time for spoiler threads has now passed. Anyway, commentary:

"Vanilla" introduced the ur-Gaijin, a male named This Guy Loves Salt!, a cheerful bloke who was effectively the manservant to a foppish Inostranets named Geshmu. I was never sure what their relationship was, why This Guy Loves Salt!, a member of a post-scarcity civilization of anarchists, was willing to spend his days literally carrying around his "boss" in a briefcase. I figured it was a case of two eccentrics who'd found each other.

The tipping point away from that idea was the 2009 Star Trek reboot, which saw Montgomery Scott exiled to Hoth along with an alien Starfleet officer who Memory Alpha says is named Keenser. I wrote: "Scotty's always yelling at [Keenser], shoving him around, generally treating him like Igor... this seemed cruel and even kind of racist of Scotty." Jake Berendes responded:

anything dealing with alien races invites a weird "possibly true" style of racism. which is to say, you can just declare "these people are not intelligent" or "these people are money-grubbing schemers" or in the case of the batfaced lackey race, "they respond well to being bossed around". perhaps this is just their way, so let's not be culturally insensitive! 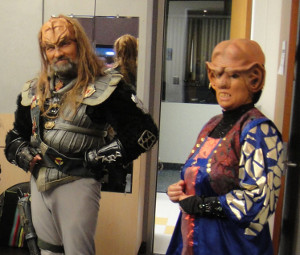 You can declare that, but that kind of SF racism is Star Trek bullshit, because it assumes not just that (e.g.) all Ferengi are greedy, but that something about Ferengi biology makes significant cultural or individual variation impossible. For an entire species to be that one-dimensional they'd have to be... eusocial insects... or something...

So! Some species (Aliens, Inostransi, humans) join the Constellation by dumb luck: they happened to get contacted before wiping themselves out or turning into Slow People. But most surviving species tend towards conservative, low-impact cultures (like the Dhihe Coastal Coalition of the ancient Farang) that can just hold on for tens of millions of years.

The Gaijin have the most conservative culture of all. Their basic culture and behavior are hard-coded into their genes and fine-tuned by evolution to maintain the complex kin selection that propagates their three-gendered caste system. When the Gaijin civilization that produced smart paper collapsed (probably due to an asteroid impact--I like using those), everyone was sad about all the people who died, but the collapse of civilization itself was not a big deal. The Gaijin just moved to the caves and started farming, because that's what you do to survive when there's no electricity.

Gaijin don't form a hive mind, like Them; they're pure individuals. But the individuals only come in three flavors, one for each caste. They're like the Cylons in the Battlestar remake. And it's not clear to outsiders which of their behavior is voluntary and which is instinctual. (Not that it's super clear for humans.)

So, in chapter 31 you'll meet a Gaijin male who's shouty and cheerful and loves doing grunt work. That's just how they are. This Guy Loves Salt! was the same way, and so is He Sees The Map And He Throws The Dart!, the guy who organized the Mars mission, and so is the person What-The-Fuck Creek wanted Ariel to be. There are three character classes, and that's it. This idea makes me super uncomfortable, but it's not very different from a lot of other science fiction I enjoy.

Whew! After all that, I have just one question for you: are you ready? Ready for chapter 29, the GAME-CHANGING, CHANGE-GAMING cliffhanger that ends Part Two? Ready for Ariel to say, "That fucking hippie was right."? Ready, dare I say, for some football?

If not, you have a week to prepare. Unless you're going through this commentary simultaneously with reading the complete book, in which case you should take a break and have some herbal tea or something.

I just wanted to say that I think "You'll Only See Kis Echo!" is the most brilliant name ever. So much world-building jammed into one little act of onomastics.