(1) Mon Jun 11 2012 10:51 Blindsided: Recently it became my duty to scan my mother's high school yearbooks. While going through the last one (1970, Fremont High in Sunnyvale) it occurred to me to check Wikipedia to see if my mom went to high school with any "notable" people. As a matter of fact, there are two notable people in the 1970 yearbook, and this led to a horrifying realization that came from the yearbook itself. This is probably the only time I'll talk about sports in this weblog, so settle in. 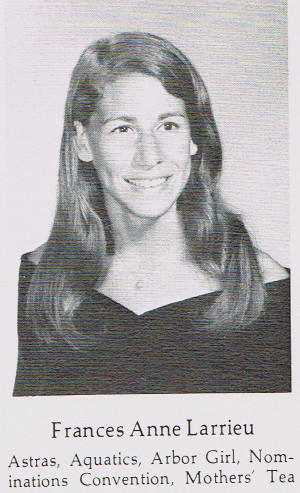 Here's Frances Anne Larrieu, now Francie Larrieu Smith. I like to think of her as "the other Frances." This picture is taken in 1970, the year she wins a national title in the 1500-meter run. Two years later she'll be running the 1500 for America's Olympic team in Munich. In 1975 she'll set the world record for the mile run. She'll compete in the 1976 Olympics, she'll make the 1980 team but won't participate because of the boycott, and she'll compete again in 1988 and in 1992, when she'll be the flag bearer for the American Olympic team. Runner's World will call her the "most versatile runner of the quarter century." Here's her entry in the USA Track and Field Hall of Fame.

Do you see something missing from the yearbook entry of this high school student in the year she wins a national track title? "Astras, Aquatics, Arbor Girl, Nominations Convention, Mothers' Tea." Where's "Track"? It's not on there, because this is before Title IX. Fremont High School didn't have a girls' track team. It didn't have any girls' sports teams.

I hadn't been paying any attention to any part of the yearbooks not likely to feature my mother. I went back and looked. None of the three high schools my mother attended had any sports for girls, apart from an annual "Powder Puff" basketball game which pitted the varsity cheerleaders against the j.v. cheerleaders.

Well, there is a page in the 1970 FHS yearbook about the "Girls' Athletic Association". It shows girls playing volleyball and doing gymnastics. I don't know what this is. It's in with the chorus and the school plays, so I think it's a club. If you were a girl and interested in sports, you joined a catch-all after-school club.

Or there's always cheerleading. In addition to the varsity and j.v. cheerleadering squads, Fremont had squads of "song girls", "flag girls", and "letter girls", as well as the Featherettes, a forty-girl pep club. But no sports teams.

Here's the story from Francie's perspective, as given in a 2012 interview (fake paragraphing inserted for clarity):

I joined a girl’s age group team (the only game in town) that disbanded after a few months. As it turns out, the coach was the new coach at what would be my HS the following year. He invited me to come out and train with the boys at the HS (remember no girls programs in schools back in the 60’s).

My first two years in HS, I trained with the Fremont HS (Sunnyvale, CA) boys cross country and track & field teams. My coach arranged for me to run in some of the boys XC meets but only so I would not miss workout when they raced. The other coaches agreed to allow me to race with the boys with the stipulation that I could not score for the team. He took me to girl’s only meets on the weekends.

In the beginning I trained 5 days week during the school year and never in the summer. It never occurred to me I lacked opportunity because I was doing exactly what I wanted to be doing—competing and working towards my goal of winning an Olympic gold medal.

After my sophomore year in HS my coach disappeared. I often wonder if his allowing me to train with the boys had anything to do with his leaving Fremont HS. In the mean time, Augie Argabright had formed the San Jose Cindergals, and I soon joined the team (again the only game in town for girls). 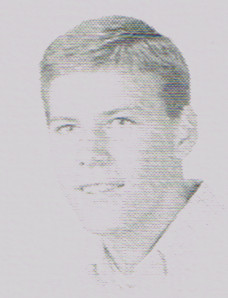 By comparison, here's Carl Ekern, the other notable person my mother went to high school with. He'll go on to play pro football for the Los Angeles Rams. He'll die in a car accident in 1990, and the Rams will name an internal award after him, honoring "sportsmanship, work ethic and commitment to teammates".

Carl Ekern doesn't have a big portrait in this yearbook because he's an underclassman. But he does show up in two group shots. Here he is on the j.v. football team: 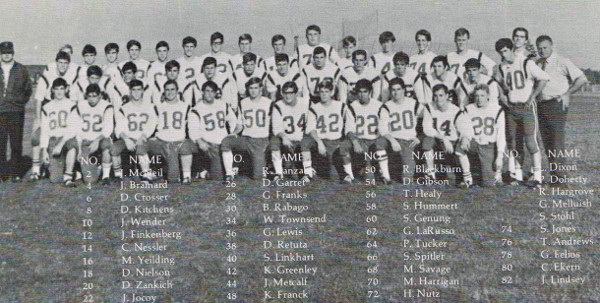 And here he is with his older brother Eric on the wrestling team: 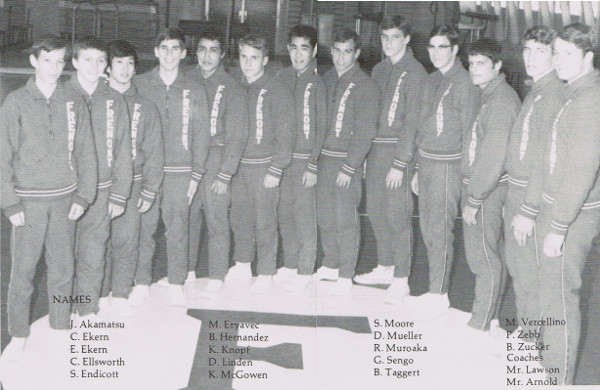 These old yearbooks have lots of girls (like my mother) in student government, band, journalism, etc. It's just sports. And I didn't notice because I don't give a damn about sports.