(9) Tue Jun 19 2012 09:31 Constellation Games Author Commentary #30: "Constellation 'Shipping": Here it is: the weird chapter. The chapter that takes what was fairly realistic SF and does I don't know what to it. Why? Because, like Her, I despise being dull. I despise it enough to risk pulling a Battlestar Galactica and ruining the reader's experience of the entire book. Amazingly, the only major complaints I've gotten so far came from writing group in the second draft, saying that the emotional tone of what came before was never as powerful as this. But if you want to complain, you're welcome to do so. 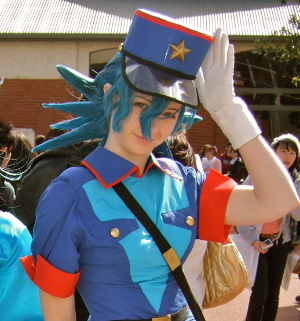 As you may have gathered from the text, I don't like the idea that certain fictional characters "belong" together in a teleological sense, an assumption that underlies a lot of art and fandom. I think it's lazy character development and I think it encourages people to think that way about real life, where it's absolutely false.

On the other hand, fiction is teleological, and fictional characters are puppets. Declaring romantic destiny between two characters is no more difficult than saying how tall they are. You just have to be careful not to contradict your statement by the characters' words or actions.

"Explain why Ariel and Jenny aren't together" annoyed me, perhaps unfairly, because the need for an explanation reminded me of this assumption I dislike. I mentioned this earlier in commentary, and also mentioned that I'd decided to include an explanation if I could think of one that wasn't a cliche. This is what I came up with: the One True Pairing phenomenon is real, but it's a curse. Any two parties so affected are the Keymaster and Gatekeeper of a door that opens into stark, existential horror.

This was kind of inspired by a story idea (I don't remember if I came up with this or read it somewhere) where an intelligence augmentation technique is invented, but people who use it too much become listless and nihilistic because they can see the true nature of the universe unfiltered by the usual coping mechanisms. There's no plot there, which gives it the hallmarks of a story idea I came up with, but I'm not laying claim to it.

On the off chance that you are really really bothered by this shift in the rules of the book's universe, here's an easy out. Ariel is an unreliable narrator! He's writing this letter to distract Krakowski as much as to communicate with Jenny. So he exaggerated something that actually happened. What happens in "Found Objects" is compatible with either interpretation of Ariel's letter.

(But it totally happened the way Ariel says.)

The train we call Part Three is just getting started on its rampage down the track. Destination: the end of the book. Don't miss next week's installment, when Ariel will say, "Your gender-neutral use of 'men' isn't nearly as endearing as you think it is."

This is my favorite chapter in a while -- I can see what you mean about Part Two probably working better all at once. There's something about setting up a depressing new house in a depressing new city as a vehicle of expressing emotional growth that always works, and that plus the idea of writing a Last Letter to a Loved One fixed the emotional tone mismatch stuff for me: it felt like the book earned it, at least.I guess I wasn't bothered by the existential nausea thing because I thought it was just Jenny being drunk and interpreting her lack of response beyond Platonic to Ariel (and Ariel's to her) as this kind of horrifying Loss of Illusion. Where it's really just like, the two Love One Another, but they don't lose their self-consciousness as one really ought to during sex, this phenomenon described in an arresting and fun way. It didn't occur to me that something supernatural was happening until I read the commentary, which maybe more about me sucking as a reader than anything? But I think it works without changing universal rules.Actually the only thing that bugged me about the letter was page eight! Ariel basically tells Jenny the Story of Their Relationship and says goodbye forever, then says "Oh, by the way, here's a terrifying responsibility on which the fate of the planet depends that I've dumped into your lap, and the previous seven pages were just to dupe the agents." It's totally in keeping with Ariel's personality to date, but damn, Ariel! I think I would have totally written him off as scum had that last paragraph not been in there, actually: even though he's making a choice to betray someone, he's equally making a choice not to betray someone else, and this is nice to see finally.I must also say that "It's what we do; it's not profound." is one of those really neat poetical lines. You've read Pale Fire at some point? It reminds me of Pale Fire lines, these kind of tell it like it is American lines. I approve of these lines.Basically this chapter rocks.

I'll accept pretty much any interpretation of the letter so long as it's not "Ariel made the whole thing up and he and Jenny have friends-with-benefits sex all the time and it's great," which contradicts "Found Objects". I made it super ambiguous because I'm uncomfortable with the supernatural element, but that is definitely what I had in mind when writing.Yeah, the whole book practically falls apart without that paragraph, I don't know what I was thinking. Judging from your reaction to the last page I think you will enjoy next week's Jenny scene.I haven't read Pale Fire, but I intend to one day.Oh, and one thing I forgot to call peoples' attention to in this week's commentary is the scene back in chapter 8 when Ariel and Jenny and Curic come back to Ariel's house from the bars. Jenny goes upstairs and sleeps on Ariel's bed, and Ariel sleeps on the couch.

THAT PART IN CHAPTER EIGHT IS MY FAVORITE THING IN THE BOOK.

I also thought this chapter was very good. It felt real to me on an emotional level, the juxtaposition of the serious stuff in Ariel's personal life with the description of the odd in-between space with the two ports and the light coming out. On the rare occasions when I've felt similarly bittersweet/surreal/untethered, that's the kind of place I'd end up and the kind of detail I would focus on.

Oh, I also wanted to mention that the semicolon in "she upchucked right in my face; how do you like them apples" was originally a comma, and Kate changed it to a semicolon, and I think it would be better as a comma but you gotta pick your battles. And really is something that picayune worth mentioning in the commentary, or even in this comment?

But without that line, Ariel is being incredibly cruel to Jenny.As an alternate reading, I find that line to be maybe the cruelest, most thoughtless act Ariel commits in the whole book (so far -- I'm still on serial, though I've got a copy I'm lending in parallel). It works: it really clarifies what kind of person he is and makes it clear in retrospect, which I think is important when you're dealing with an unreliable narrator.

(Hmmm, blockquote tag swallowed in previous post. Should be quotes, then, around "But without that line...")

Yeah, I guess it depends on how Jenny takes it. In my mind, if Ariel had had the guts to say that to Jenny's face, her response would have been a Han Solo-esque "I know." For me, the really bad thing Ariel did was not telling Jenny that until he was safely off the planet.