Fri Jun 22 2012 09:20 The Least Clever Limericks: One side effect of downloading 90,000 limericks is you have a lot of data. Actually, that's the primary effect. Given that Dada Da Dada Da Dum requires I classify the limericks by the sounds they use in the A and B rhymes, I thought it would be interesting to tabulate that data and see which rhymes are the most common.

Well, some of the stuff's not that interesting. Here's a stack graph showing the number of limericks using the top hundred A rhymes and the top hundred B rhymes. To me it looks like a generic graph. There's no shocking pattern and no real difference in the way A and B rhymes are distributed. 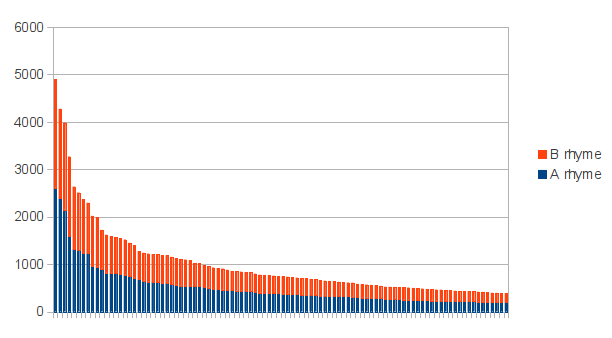 This is a very disappointing conclusion, but with this knowledge I have been able to write the world's least clever limerick, statistically speaking:

Oh, hi, I was looking for you
I'm bored and there's nothing to do
I've been listless all day
So what do you say
We take off our clothes and we screw

After writing that, I went through the dataset and discovered a naturally generated limerick that comes very close to having minimally clever rhymes! Its only failing is it uses "way" (#3 word for the EY1 sound in B rhymes) instead of "day" (#1):

In an earthquake, the best thing to do
Is to set about having a screw.
When you're done, you can say
In your nonchalant way
May I ask, did the earth move for you?

I think a comparison to a similar corpus of non-obscene rhyming poetry would be instructive.

While gathering this data I fixed a bug in my screen-scraper that was sometimes causing a B line to be treated as an A line, which of course screwed up the meter of some generated limericks. I've also changed the way limericks are posted to Twitter, so that if you go to the @DadaLimericks page the limericks in the archive won't seem to run into one another.

As a bonus/palate-cleanser from those unclever limericks, here's a very clever Queneau limerick that I don't think a human would have come up with:

The North Pole is a little bit shy
And Air France? Just the pure l'eau de vie.
My question today
That this mortal clay
She was born just before World War I.