My plan was sheer elegance in its simplicity. Every day I would go to Kickstarter's list of recently launched projects, scan the ~50 new projects, bookmark the interesting ones and then put money behind 1-3 of the interesting ones. Then I wrote about the projects I'd backed on News You Can Bruise. This was a) a birthday present to myself and b) a great source of experimental data. Would it be fun? (Yes!) Could I could drive my readers to contribute to Kickstarter projects? (Not really!) What would Kickstarter's official stats look like if they only covered projects I, personally, cared about? (Quite different!) Most importantly, what about the backer rewards? 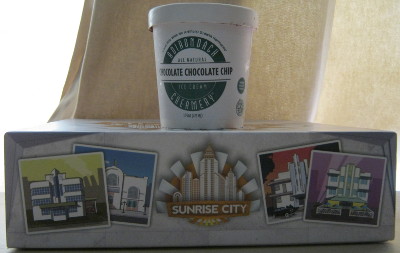 The backer rewards are great. It's like being pen pals with the Internet. I'm still getting rewards. Yesterday I went and picked up my ice cream for July 17's Milk Not Jails project. My laid-back, experimental attitude towards the whole thing has saved me from nerdrage when the shipment schedule slips, or the project owner flakes out altogether, or the reward arrives and is just disappointing or lousy.

BTW, flakeouts are very rare, but I gotta name-and-shame Keith Kritselis of the tesselated cookie cutter project because I did a whole detailed analysis of his project and now he's flaked out and not delivered anything. Didn't see that coming! I hope he's just flaked out, and not dead or in prison.

Anyway, the actual question I've been thinking about: how about repeating Month of Kickstarter this July, to get a new data set, a new bunch of rewards, and see how things have changed?

I can tell you right off that I've changed. I am a lot pickier about Kickstarter rewards now than I was last year. I'll like a book/movie/album (preferably electronic), or some food, or a game, or a nice piece of art I can frame and hang up, but that's about it. I don't get any great satisfaction from having my name in the credits, and I'm tired of stickers and patches. I thought those would be great rewards because they're easy to mail and don't take up much space, but turns out I don't use 'em.

And one thing about Kickstarter has changed: usage has exploded. After last year's MoK I kept checking the new projects page every day, but I stopped after a few months because it was just too much stuff. I don't have time to read that firehose, so I backed a Kickstarter project to do it for me.

My estimate as of today is that there are 150 new projects posted to Kickstarter every day. I need to double-check this number tomorrow and possibly update this post, because it's a statistic Kickstarter doesn't provide. (Update: The actual total is more like 125.) 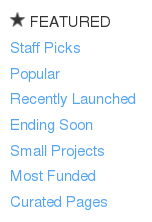 And here we come to the problem. Kickstarter's UI has not changed. Not in any way that would make Month of Kickstarter easier to do, and it wasn't that easy to begin with. 50 projects/day was kinda doable, but I'm not going to look through three times that many, and there's no way of filtering out the ton of projects I almost certainly won't be interested in.

Kickstarter's UI is very carefully designed, so after a year of seeing it not change in ways I think are pretty obvious, I'm starting to think the absence of certain features is deliberate.

Forget Month of Kickstarter for a minute. Imagine that you, like me, are really into board games. You want to track all the new board game projects added to Kickstarter. You can't. There's no way to do this except by going through the global "new projects" page every day and picking out the board games. You can see "staff picks" and "popular this week" and "recently successful" and "most funded" but not "new". (Feel free to prove me wrong--I'd rather have this functionality than be right about its absence.) It's like a bookstore that has all the sections you'd expect, biography and horror and so on, except the "new releases" are all jumbled together and ordered by release date.

I have a hypothesis: there's some basic incompatibility between browsing, which is what I want to do, and Kickstarter's user model or business model. Over the past year, instead of doing things that would make Month of Kickstarter easier, Kickstarter created a site-internal social network so that your pals' activity would filter through to you and you'd find out about new projects that way. I think that's their user model: money flows to a Kickstarter project through a social network rooted at the project's creator. Social networks driven by Facebook and Twitter and just plain advertising (the board game podcasts I listen to have a ton of advertising for Kickstarter projects), but also now possible through Kickstarter itself.

Apart from the "Recently Launched" page and a couple others that aren't as useful ("Ending Soon" and "Small Projects"), every project discovery mechanism on Kickstarter (and there are a ton) is based on finding projects ratified by someone else: Kickstarter staff, or people in your social network, or someone operating under the name of a trusted brand, or (as with "most funded") just an unusually large number of random backers.

And sure, this works. I back my friends' crowdfunding projects all the time. But it means that your Kickstarter project is guaranteed to to sink without a trace unless you can get someone else's attention outside of the site. If I'm right, this is the point of the whole design. We learned from the last Month of Kickstarter that your project will fail if you don't hustle. Kickstarter makes it clear that hustling is your job by effectively hiding all but the most-hustled projects. Most site visitors aren't interested in backing sixty projects to see what happens. They want to back one or two projects from a curated list. So the system works for them.

The problem for Month of Kickstarter is that while hustle may or may not bring success to your individual project, it will not show your project to me unless our social networks intersect. That's not good enough. I need to see a list. But the list needs to not have 150 items in it every single day. I've spent the last eight months doing a project (the Constellation Games author commentary) that forced me to do a big context switch every week. I'm not really feeling the need for a daily context switch, and I certainly don't want to look at 150 projects a day. Last year "Recently Launched" did the job, but this year it won't.

They must have these advanced mechanisms. Whoever puts together the curated O'Reilly page doesn't trawl through 150 projects a day seeing if there's one they want to add to the list. But without access to those mechanisms I can't really do this.

Like I said, I'm gonna give it a shot anyway. But it may descend into me backing projects without writing about them, or I may give up altogether. I've got other stuff I need to work on, and the thrill of gathering another MoK dataset to compare against last year's is probably not worth the time.