(3) Tue Jul 03 2012 09:25 Constellation Games Author Commentary #32: "The Evidence of Absence": This chapter has the most artsy title in the book. It's a reference to the idea of negative space, of emptiness as a thing in itself. Every section of the chapter has something to do with negative space: the fossil imprint, the absence of Jenny from Ariel's life, the player character's amnesia in The Amulet of Manufactured Memory, and the holes in the ground where the garbage has been taken out. Part Three was originally called "Negative Space," and you'll see why in the last chapter.

It's not just Part Three though. Negative space shows up through the whole book: as the foundation hole where Ariel's house used to be, the fractal pits Tetsuo and Somn dug out of the moon to build Ring City, the expectation that contact missions always find dead civilizations, and, uh, Ariel's negative reaction to being in space. Part One of the novel is about Ariel and the Brain Embryo, whereas "Found Objects" is about Jenny and the reentry foam with a Brain Embryo-shaped hole in it. It's what we in the trade call symbolism. 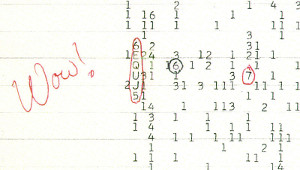 Symbolic of what? The Fermi Paradox, basically. The fact that the more we narrow down which numbers should go into the Drake equation, the better it looks for life in the universe, yet here we are, alone, facing down an emptiness that has become a thing in itself. The idea behind the Constellation universe, going back to "Vanilla" before I came up with any of the backstory you see in the novel, is that we find out we're not alone and it doesn't help. We're all lonely together and some of us (here, Somn and Ariel) are lonelier than we were before.

In the first draft Somn actually referred to the fossil imprint as "the evidence of absence". I cut it because I couldn't imagine something that poetic making it through the Purchtrin-English translator. But that's what she was thinking. That's canon.

Next week is the last "normal" chapter of the book. After that it's all climax and denouement. Tune in next Tuesday to hear Curic give her heartwarming monologue, "I was trapped alone in a decaying world of the dead."

I just read the whole thing again cover to cover and it was better the second time. I am going to credit this book with making me realize I am an anarchist.

>I suspect that weblog entry was also one of the main inspirations for Constellation Games itself, so thanks, Ben.You're welcome! This is not something I had suspected until now, and it comes as a pleasant surprise.

The serialization is up to Chapter 34, now, and I'm liking the headlong rush to the end, but all the same: As I was reading Chapter 32 for the first time, I got that creeping chill you get when you realize that you're coming to the end of a really good book and there won't be any more. I was sure I was going to come to this page and see a, "that's all, folks!"