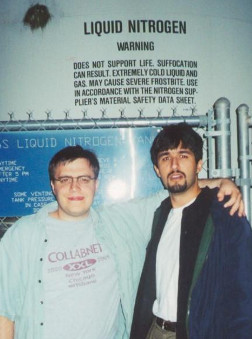 This was the original ending of the book—not the extradition, but the art museum. Constellation Games is a story about creativity, and I always wanted the book to end with a big action scene based on creating things rather than blowing them up. You can imagine the creation of the museum going where the excavation of the dumps is now, and you'll have my original picture of the ending.

While initally planning the book I talked with my friend Kris Straub about how you plot a long-form serial arc. Kris created a comedy SF comic called Starslip which I mentioned briefly back in the Chapter 30 commentary and probably elsewhere. Starslip takes place on a spacefaring art museum. Kris drew it for seven years and did an amazing job combining blockbuster-movie action with a near-total lack of problems that can be solved with explosions. (The two best examples.)

I don't know how much of Kris' advice on plotting went into the arc of Constellation Games (Brendan has a guess), but this ending sequence, with its monumental redemptive act of copyright infringement, comes directly from that conversation and from the creative debt I owe to Kris over the years.

The microblog keeps chugging along. The stuff you'll see for the rest of the month is still stuff that happened in November, and will be archived under chapter 33. (Last week's stuff starts at November 11.) For reasons that should be obvious now and will be made explicit next week, Ariel will not be live-tweeting the extradition attempt.

You know it's getting serious now. Tune in next week for the book's AMAZING occlusion conclusion, when Dana will say "Nothing should be exploding."

Nicely enough, the conversation between Krakowski and Curic came perfectly timed for a conversation about stories that set themselves in an alternate, post-scarcity economy. Most of these stories never quite grapple with what to do about defectors, and I love Krakowski's "I refute it thus" moment.

(1) I damn you, sir, for making me excitedly quit reading and run to Google to look up "Harpo Agonistes," thinking "How could I have possibly missed out on the existence of such a work!" First result is the author commentary. I have no idea of this is a common hazard of alt-historical work.(2) This chapter is pretty great, and even includes what I have to believe is an intentional Barton Fink reference. Indeed, you've captured that Barton Fink feeling!

Ooh, what's the Barton Fink reference? I haven't seen Barton Fink for about ten years.Andrew Willett from my writing group once brought in a story involving a Robert Mapplethorpe photo from the 1980s, and another one involving the life of a Catholic saint, and both times I was totally convinced he was riffing on a real thing. But no, he made it up. He's really good at that stuff.

The Barton Fink thing is specifically the line "The upholstery smouldered and bright flame slowly consumed the stark wallpaper," but I think I was primed to think of Barton Fink by the immediate context of the line: a G-man comes to what's essentially a depressing, deserted hotel whose entire aesthetic is alienating and misguided. He handcuffs a relative innocent and accuses of him of conspirations. Allegorically, Ariel's program is John Goodman here, an agent of change.

I gotta watch that movie again. I don't remember anything about the G-men in Barton Fink. But I can certainly picture the metafractal as John Goodman's character, burning everything down, shouting "Look upon me! I'll show you the life of the mind!"

Sad to say, I can't tell Krakowski and Fowler apart when there's only one of them on stage. Like, I am under the impression that one of them is supposed to be less of an asshole than the other, but I don't know which one.I really like the way Ariel decides to redo Human Ring (and his reasons for it, which I guess we haven't quite got to yet). Although, having just been in Italy: is there a corridor somewhere that's just wall-to-wall medieval Christian iconography for miles? Because man, is there ever a lot of that.Is "Vanilla" somewhere I can read it?

At this point, there isn't any difference. Fowler was a dumb asshole and Krakowski is an intelligent asshole. But Ariel is also an intelligent asshole; he just doesn't have the power of the state behind him.There are miles and miles of medieval Christian iconography. Chapter 35 mentions "two flanking lines of nearly identical statues". This is the sort of thing Ariel would have caught in a test run if he'd had time to do one."Vanilla" is under wraps until I eventually redo it.