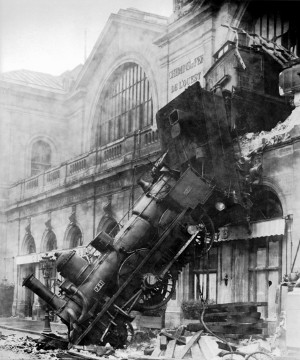 When I look at my narrative arcs I see myself shovelling coal nonstop into a locomotive which builds and builds up speed, until it's travelling at relativistic speeds, like the locomotive in Einstein's thought experiments, going so fast that Lorentz contraction becomes apparent, and then the locomotive crashes into a wall and that's the end. If you've seen me give a technical talk you've seen the same thing; my talks generally end with "And that's the end of my talk." Not saying that's a good thing, but that's kind of where I am as a writer.

We start this chapter in the middle of the big action scene, the climax of the climax, the moment at which the locomotive is going as fast as it's ever gonna go. As with chapter 22, I came into this scenario treating it like a puzzle. I put Ariel in peril, wrote down all the details that might be relevant and tried to figure the best way out.

The difference between this and chapter 22 is that, as Curic says after the locomotive crashes, Krakowski's failure is overdetermined. He's operating on enemy turf and his plan is insane. He only gets as far as he does because Dana is enabling him. Dana having somehow gotten the idea that a huge dramatic rescue is a good way to spark romantic interest in the person you rescued.

So here the challenge was coming up with the most interesting way to solve the problem. The only restrictions were that Ariel had to take an active role in saving the day, and I didn't want Krakowski to die. As in chapter 22, Ariel tries a lot of stuff that doesn't work, and with the introduction of Dana his problem gets even worse, but here in the second part he's able to save the day in suitably dramatic fashion.

I think this sequence is pretty good for a first try, but in the future I'm going to try to plot these big action scenes a lot better. The "write everything down and figure something out" technique is a little sloppy. I should have had this planned much further in advance.

Before the misc commentary I want to announce that the microblog archive is complete! I wrote 403 tweets for Ariel and 173 for Tetsuo, not to mention the software that scheduled their posts in a realistic way, and it was all super time consuming. There are two tweets that haven't been posted yet, but I went ahead and added them to the archive. Ariel's final tweet I wrote just now, to give his feed some closure. I didn't like the idea of the top of his Twitter feed saying I don't think that deserves a special "freezer edition" for the rest of time. That looks the Twitter feed of someone who died suddenly.

As you find out this week, Ariel doesn't die, and this isn't the end of the stuff he and Tetsuo post in-universe, any more that "A Few Ip Shkoy Games About Asteroids" is the last thing Ariel ever posts to his blog. But it is the end of the slice you'll be able to see, because the novel's just about over.

The denouement approacheth! Tune in next week for THE SERIES FINALE, when Ariel will say, "You named a girl after me?"

That is a good ending! I assumed it the ending proper until I heard about this whole wrap-up chapter. I like Curic's last line a lot, the ambiguity of it, and I like that this is one of the rare (fiction) books I've read that marshals a complicated plot that takes into account the horrible aspects of human nature, yet that ends up being pretty optimistic about matters. This is rarer than it ought to be and it's hard to do well, but I think you pretty much have.I do hope the last chapter deals in some way with the special "neighbors in space" hell you've set up for your protagonist and antagonist here. I love that they end up in a situation where time and isolation are going to pretty much force them to befriend one another.

It's pretty common for readers to think this is the last chapter. As far as the book's 'author' is concerned, it is the last chapter! I was a little worried about this while writing, but it's not like you'll stop reading the book when there's clearly 10 pages left.This is Krakowski's last scene, and in the next chapter you'll see that Ariel isn't quite as isolated as he seems. But I do imagine K and A eventually become friends, since they are basically the same character.

BTW, Jeanne, I bought Barton Fink on DVD and watched it last night with Sumana. My fascination with endless hallways definitely comes from that movie. I know I imagined endless spaces before Barton Fink, but they were always open spaces, like the docking bay.