(3) Mon Jan 02 2012 19:32 Frances Daily: We're out of the gate with the first Crummy project of the new year. I spent Christmas in Utah, and while I was there my sister Susanna foisted on me my mother's old Franklin day planner. She's already typed up my mother's Franklin diary from the 80s and 90s, a diary very similar to the weblog she kept from 2001 until she died in 2006, so all that was left of the day planner was an enormous block of calendars. 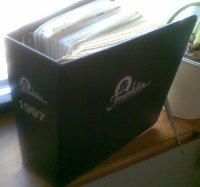 It's a very detailed calendar that will be useful for family history purposes but quite boring otherwise. Except, at the beginning of each month there was an "index" page on which my mother had written a brief summary of every day of that month. There were index pages from January 1987 to November 1990, with a few sporadic months from later on.

The cumulative effect of these daily summaries was incredibly powerful. This was a time of major upheaval in my family, leading up to (but not ending with) my father's death in 1992. The monthly summaries show my mother trying to keep it together while studying for a graduate degree and raising three kids pretty much on her own. It's inspiring and a bit horrifying.

I've started a Twitter account, @FrancesDaily, which is using Sycorax to reprint the daily summaries 25 years after my mother wrote them. (Here's the RSS feed.) The summary for each day will go up at 4 PM Pacific time. It's a little spotty in January, but once it picks up she doesn't miss many days for the next three years.

I don't know what the effect of the summaries will be when experienced in real time. Probably when I read one I'm going to mentally compare my day against the day Frances had 25 years earlier, and you might want to do the same.

This is a much lower-bandwidth project than Roy's Postcards, but where my father's writing almost never showed any emotion, these summaries pack a lot into just a couple words. Susanna read the index and said "Mom was really hard on herself." So please take entries like "wasted day" as accurate depictions of my mother's mental state, but not necessarily of reality.

A note about the names. I did the thing you frequently see in old journals that have passed through the hands of the journal-writer's descendants, and replaced most of the names with initials. For instance, the January 18 summary, "Mario's Eagle", became "M's Eagle". The Mario mentioned is Mario Canton, one of my dad's Boy Scouts and later a family friend. I initialized most of the names because you don't have the context to know who all these people are, and I think giving each entry an explanation significantly longer than the entry itself would ruin the effect.

In a few cases, making peoples' names into initials was also necessary to protect their privacy. I left a few names intact: mostly my mother's close relatives like her aunt LeJeune ("Jeuney"), her sister Anne, my father, and of course me and my sisters.