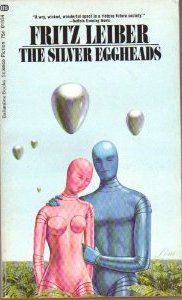 It starts out so well! Actually my copy starts out pretty poorly, with this self-congratulatory blurb which I'm mainly quoting so I don't have to summarize the plot:

It is a very lucky thing Fritz Leiber decided to be a writer and not a surgeon. Somewhere in his background, though, there must lurk a frustrated medico, for he writes, as it were, with a scalpel... His target this time is the whole world of the literari—writers, publishers, reviewers and the great reading public—a rich field of self-flatterers, phony intellectuals and soft-headed businessmen to which Mr. Leiber does full justice. But because he writes with infinite glee, he is not vicious: he doesn't hate the world or the people in it. He simply has fiendish fun in cutting through to expose the frenzied, tangled, Heath Robinson structure beneath the complacent surface.

Hey, baby, you must be a frustrated medico, for you write, as it were, with a scalpel. (Also, Heath Robinson ~= Rube Goldberg.)

"Reviewers" get off pretty light in The Silver Eggheads; I don't think any reviewers even show up. But we got writers! A militant union of writers who in the opening chapters go on strike and destroy the wordmills, 1960s room-sized computers that act as their coauthors and creative enablers. In the destruction of the wordmills Leiber gives us some honest-to-goodness infernokrusher:

Infernokrusher fans will also enjoy this monologue later on in the book:

But I did spot a federal investigator named Winston P. Mears just outside. I got to know Mears while he was investigating me on charges—nothing was ever proved—of designing atomic-powered giant robots (an inevitable technologic development that still seems to terrify most humans).

It's a really funny book. And man, the robots. There's a government robot programmed for censorship. It's only fair to let you know that I'm gonna flat-out steal that idea, and when you see it you'll know this is where I got it. There's a robot who writes science fiction for other robots. We get to see a bit of his work: this is from the steamy "cranking scene":

Apparently that stuff really does it for robots. (We also see some terrible human-written science fiction from the infrafictional slush pile.) And here's where things start falling apart/being interesting only by accident.

The robots in The Silver Eggheads are humanoid and have gender, but they're not human genders! Some robots are "brunch", aka "robost" (whence "bost working pinchers"), and other robots are "silf", aka "ixy" (whence "silfish burden"). I spent half the book wondering what was the deal with these genders and why they didn't use human genders. It's pretty clear that "brunch" is male and "silf" is female. It's clear by the use of pronouns, and from the silf censorship robot, who says "I have a lot more in common with beings of my own sex, whatever material they're made of, than I do with babbling robots or brunch men." But why not just use "male" and "female"? WHAT WAS GOING ON?

What was going on was, I was overthinking it. There's no difference. Halfway through the book, in an infodump that spans two chapters, we learn that the robots copied human genders. Robots don't use the terms "male" and "female" because robot gender is a social construct. Unlike human gender, you see.

[I]t's become traditional for a robot—a brunch robot, I mean now—to have conections that are all of the pattern you humans call male, or plug-ins, while a robix has only female connections, or sockets.

Yeah, whatever, Fritz Leiber. You had your chance to create entirely new genders for robots and you blew it. Not surprising, given your 1960s Playboy sexism that is quaint enough in the first part of the book but which takes over the storyline around the time of the two-chapter infodump and turns The Silver Eggheads into wacky "battle of the sexes" crap and jokes about breasts. Also, there's no evidence that you ever wanted to be a surgeon.

So, as I said earlier, I dunno. The Silver Eggheads: an infuriating mix of hilarity, insights into creativity and generative fiction, and crap.

I dunno! I'm kind of charmed that the robots like deliberately constructed this insane social gender system, to the point of DELIBERATELY HAMPERING THEIR OWN CONSTRUCTION (presumably it's a terrible design idea for human purposes to restrict by half the number of socket connections any given robot can have.) The incredibly abstract robot pornography really drives it home. I have no idea of Lieber was into this idea or just being comically lazy, but I think it's kind of great that gender is thought of in this clearly repressive grim future world as exactly as repressive and nuts as it is in our world, down to the absurdity of making worse robots to conform to gender notions. (The same thing always bothered me about Arcee.)

Indeed. The passage I quoted continues: "This can result in bothersome contretemps, as when a robix has to plug into a wall socket in an emergency. For this she carries a double-male connection, though it's an embarrassment to her and she'd dread to be seen using it except in the completest privacy."I have had the same kinds of thoughts but I think we're both taking the "gendered robot" idea and running with it in a modern direction. You can read the book and make your own decision, but I cut Leiber a whole lot of slack before giving up. He just kept making it really clear that he had standard 1950s "vive le difference" opinions about women (opinions I've also found in his other works).

"Also, there's no evidence that you ever wanted to be a surgeon."thanks for the laugh