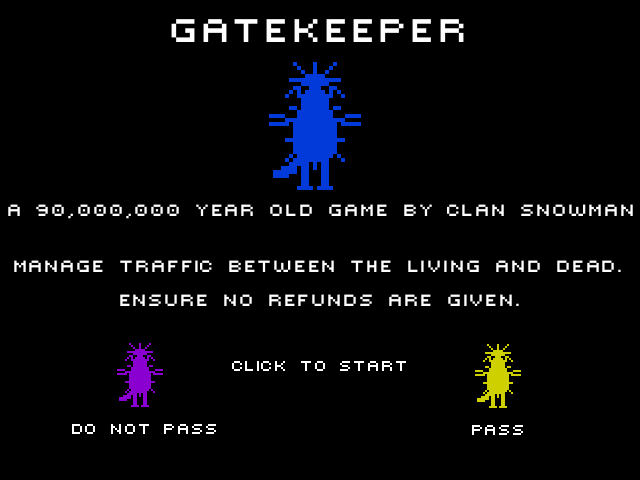 Damn, the time is flying. Part One ends in three weeks. And today there's a lot of non-commentary stuff I want to talk about, so the commentary itself will be pretty light.

First, I want to tell you that Jeremy Penner implemented Chapter 5's Gatekeeper in HTML5 for the 2012-in-One Glorious Developers Konference Kollection. You can play it online. I wouldn't classify Gatekeeper as fan art, though Jeremy is a fan, because he did it for me as a Kickstarter reward. But either way, it's pretty great!

Second, I want to talk about the process of designing the cover art. You don't have to read the book to "get" the cover—that wouldn't exactly help sales—but the design details are a product of in-world thinking. And at this point you've seen enough of the universe that I can go through that thinking without big spoilers.

The cover is by Chris Sobolowski, who wants me to mention his email address and let y'all know that he's available for graphic design work. So if your contract with Jenny Gallegos fell through due to her being a fictional character, contact Chris, who's a real person.

The process went like this: first, Kate and I laid out a huge number of cover ideas (some of which I've mentioned in earlier commentaries), and decided we wanted a cover themed around the ET hardware. At this point Kate got Chris involved, and Chris came up with a couple sketches that made the book look like a handheld computer. Here's one of them, next to the cover we ended up using: 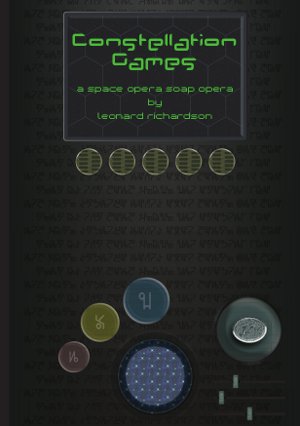 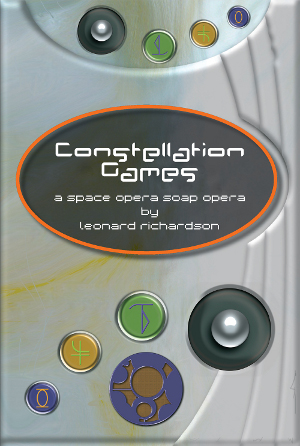 I've spent months looking at the finished cover instead of this first draft, and what strikes me now is how similar they are. But what struck me at the time was that the computer looks like a piece of military hardware. It's dark and brooding, like one of Batman's gadgets. I wanted something flashy and colorful, like one of Batman's gadgets. Or like the Hitchhiker's Guide, to not use the same analogy twice in a row.

But I'm not the artist, and I'm also not a writer who thinks he can do the artist's job. So instead of demanding specific changes I wrote two different in-world histories for this handheld computer, and presented them to Chris.

In one story, the computer was a product of the Dhihe Coastal Coalition, the Farang civilization that produced the Brain Embryo. This explained the military appearance, and it had certain implications for changes he should make to the design. (E.g. making the buttons much smaller).

In the other story, the one we went with, the computer is an Ip Shkoy ripoff of a Dhihe design, produced by Perea, the conglomerate that also put out the game reviewed in this chapter, A Tower of Sand. (The glyphs on the final cover's buttons say "pe" "re" "a".) This has its own implications: the colors are now so bright as to verge on the garish, making the computer look more like a consumer product and making the book look more like a comedy and less like a technothriller.

In this story, the only remaining Farang detail is the Brain Embryo-esque mother-of-pearl finish. Stylistically it's reminiscent of the wood grain on an Atari 2600, but it tells a different story. When you were a kid, electricity was an advanced technology. Then all these space aliens showed up handing out blueprints for handheld computers. You want something that looks as different as possible from the wooden toys you had when you were young.

The cocktail cabinet-like second set of controls at the top comes from this bit I wrote about the computer's social context:

This device would need to have some two-person controls, so that you can play those icebreaker games with your would-be conquest, but the overall feel would be that this is my computer, but I might let you use it.

Chris took the Ip Shkoy story and produced something that's very close to the final cover. Here's another side-by-side comparison: 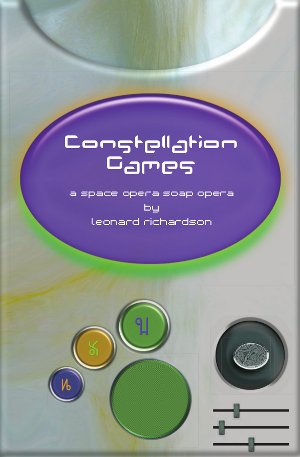 After that, there was a lot of back and forth on trivial details like how much and what kinds of wear should be visible on the computer. Around this time Adam was designing the Pey Shkoy language for Tetsuo's Twitter feed, so I asked him to also design a script for use on the cover. This is also the point where Kate got the idea for a "Berlitz Traveler's Lexicon," which became "Pey Shkoy Benefits Humans."

I haven't mentioned the back cover, but at this point I think I've reached or exceeded the limit on how long this discussion can be without getting dull, so let's move on to chapter 14 commentary. But not before linking to the archive of last week's Twitter fun.