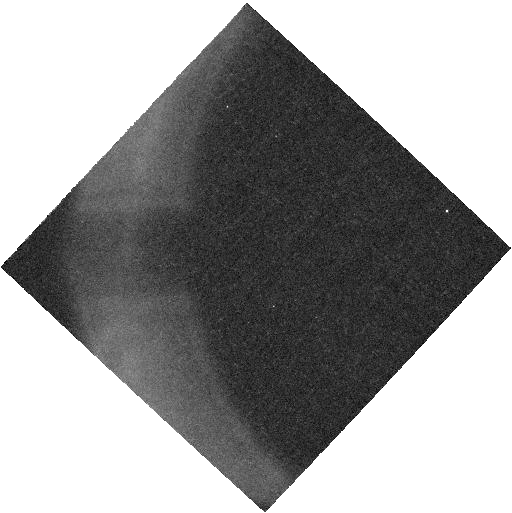 There's a competition going on right now called "Hubble's Hidden Treasures", a competition to identify amazing but overlooked images within the Hubble Space Telescope's massive twenty-year data archive. I have no special expertise in image processing or astronomy, but I so coveted the prize of an iPad[0] that I thought I'd try my hand.

See, most people who enter this contest are taking pictures of nebulae and galaxies and setting up the colors to represent different wavelengths of light. Here's a nice example. These images have aesthetic value but are merely emblematic of Hubble's scientific value, which comes from the raw data. As long as we're playing that game, why not find aesthetic satisfaction in Hubble's glitches? My innovative thinking will surely net me the prize.

Just as an example, here's a super-washed-out image that could have the date and place of your punk show written in the middle of it. Lots of images have glitchy edges, and my original plan was to make a collage of the glitchy edges. But then I found the image to the right, which blew my stupid idea out of the water.

I call this ghostly image "hst_05909_01_wfpc2_fr418n18_pc", because that's its Hubble dataset ID, but if I were hanging it in an art gallery I'd call it "Cygnus", because that's the search I used to find it. Here it is big and zoomable. Here's a larger image (it's the full WFPC2 image--the one to your right comes from the Planetary Camera bit of the WFPC2) which I think makes it clear the feature you see is a photographic artifact and not a real thing in space.

I don't have anything more to say about hst_05909_01_wfpc2_fr418n18_pc; it's just a nice piece of abstract photography. The Hubble Legacy Archive is great stuff in general, though.

[0] Can the winner get 5 minutes of Hubble observation time or something contest-specific? Just trying to think outside the box here. The box labeled "box of iPads for use as contest prizes".