(4) Tue May 01 2012 09:27 Constellation Games Author Commentary #23, "Trust Us, We're Expert Systems": I do believe it's time for a super dark relationship chapter. That's what I believed when I wrote this, anyway. Clearly I was eager to keep landing the body blows on Ariel after chapter 22. 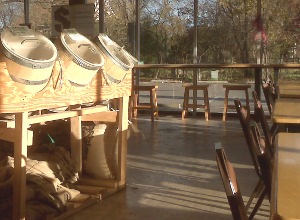 It's always sadder when characters bring about their own destruction than when someone else screws them over. In the second draft this episode was a little less of a downer, because while Ariel was living in coffee shop exile he had a great idea for a mobile app he could write very quickly and sell to recoup some of his losses from the last chapter. So all the awful stuff between him and Dana and Jenny still happened, but at least we ended on a positive note. Who needs that, right? Just hang tough.

I cut out the "mobile app" subplot because it added a lot of story complexity for no real benefit. Ariel's already working on a software project, so why add another one? He puts out a press release for it next chapter, but I just turned it into a press release for the Sayable Spice: Earth Remix demo. Works fine.

I'll talk about the proposed app after the miscellaneous commentary, because this week's is a little light and next week's will probably be huge. (Spoiler: Tetsuo comes to Earth.)

Okay, about that mobile app. One thing that barely shows up in Constellation Games, but was very important in "Vanilla", is the contact audit. To sponsor an ET for an American visa (as Ariel did for Curic and Bai is now doing for Tetsuo), you need to register with the BEA as a contactee. You're supposed to do the same if you have any prolonged or repeated contact with ETs, although the Greenland Treaty is quickly making that unenforcable.

All registered contactees need to come in to their local field office twice a year for a sit-down interview about all the ETs they've encountered over the past six months. It's generally a formality; the point is to make contact with ETs a pain in the ass and, on the margin, discourage people from having anything to do with the Constellation.

Ariel's mobile app idea was a "contact manager", a way of taking the pain out of your contact audit. Whenever you meet an ET you just take a picture of them—something you were going to do anyway—and enter their name. Then your contact audit is effectively just a slideshow.

In the second draft, Ariel's key business insight was that although relatively few people really need this app, a lot of people want to be the sort of person who needs it, so they'd buy it aspirationally. Clever idea, but not really necessary for the story, so out it went.

That's all I got. Tune in next week for the TETSUOUS continuation, in which Ariel will say "Jesus Christ the great moral teacher!"

You've posted author commentary but chapter 23 isn't up yet! ):

I've emailed Kate about the missing chapter, but you should be getting it in your email. Would you mind checking your spam folder?

Kate says chapter 23 is archived. Can you describe the problem in more detail? (Or just try again.)

You're right, it was in my spam folder. Sorry!