(1) Fri May 25 2012 11:25 Crazy the Scorpion: A cooperative card game: I've been having a great time with a card game Beth Lerman and I invented, a game which I'm calling "Crazy the Scorpion", for the same reason "Exquisite Corpse" is called what it is. If you want a less interesting title it can also be called "Newsworthy". 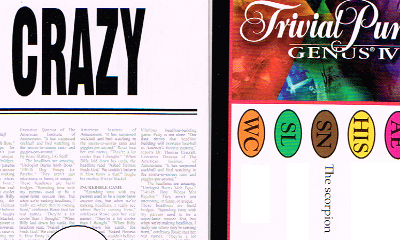 Crazy the Scorpion is based on the "fun variant" of Man Bites Dog invented in 2010 by Kevan Davis, Holly Gramazio, and myself, but it's even more fun, and replayable to boot. I've tested it with two and three players. It should work with four, but probably not more than four. It plays in 20-30 minutes. I'm releasing these rules, and the print-and-play cards (see below) into the public domain.

Update: In 2013 Kirk Israel and I made a browser version of Crazy the Scorpion.

To play Crazy the Scorpion, you need two decks of cards:

Trivial Pursuit cards should be easy to find--in my experience, the Trivial Pursuit family is the single most common board game find at thrift stores and yard sales. You can also use Once Upon a Time cards or red Apples to Apples cards (not playtested).

The goal is to construct a 5x5 magic square of headlines, out of headline cards and Trivial Pursuit answers. The best way to explain the game is with a...

I start the game. I draw the Man Bites Dog card "SCAM", and a Trivial Pursuit card with these answers:

I lay down the cards like so, and designate the Trivial Pursuit card as the "Gopher" card. 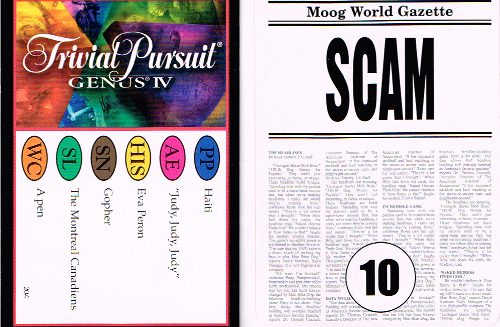 The headline reads "Gopher Scam". Other legal layouts include "Scam The Montreal Canadiens" and "A Pen Scam". Anything that could conceivably be a headline in any universe. I could have laid out the headline horizontally or vertically.

Now it's your turn. You draw the Man Bites Dog card "DEVOTED" and a Trivial Pursuit card with these answers:

You lay down your cards like so, and designate your Trivial Pursuit card the "Abraham Lincoln" card: 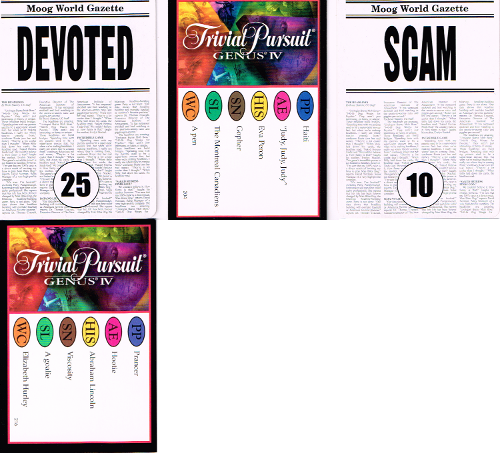 "Gopher A Goalie" is an illegal placement: it would put two Trivial Pursuit cards next to each other, which violates suggestion #1. "A Pen Devoted" is also illegal: it would rename "Gopher" to "A pen", violating suggestion #2.

Now it's my turn again. I draw the Man Bites Dog card "DRUGS" and a Trivial Pursuit card with the following answers:

I lay down my cards like so, and designate my Trivial Pursuit card the "A quantum" card: 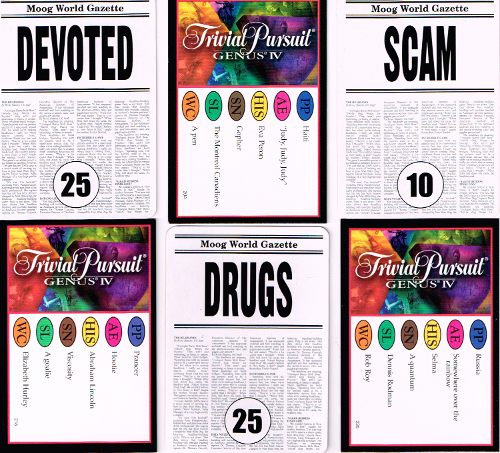 Now there are six headlines:

Among other legal moves, I could have formed "Devoted Gopher Scam Drugs Dennis Rodman" instead.

Halfway through my third turn, we might have a nice 3x3 magic square that looks like this: 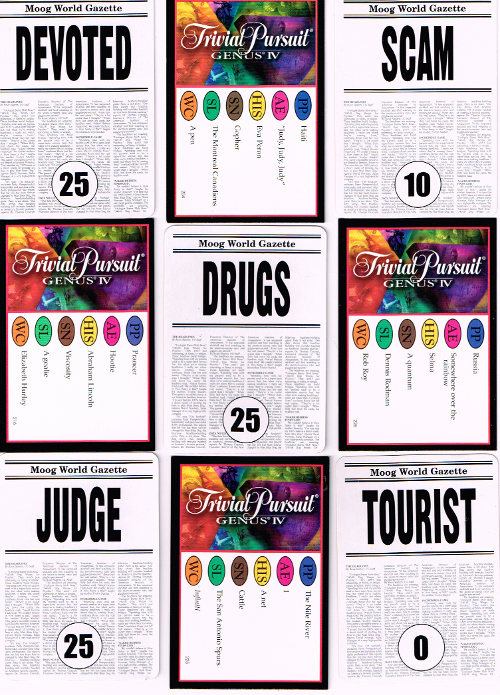 Or, in textual form:

(More likely, that early in the game we wouldn't have a magic square at all. But this makes for a better illustration.)

By the end of the game we'll have headlines like "The Ladybug Judge A Net Tourist, Charlemagne Blasts" and "Nicotine-Devoted Abraham Lincoln: Judge Buckminster Fuller's Movie."

Now I think you're ready for the...

The goal is to construct a 5x5 magic square of headlines. Or, for the adventurous, a 6x6 square. Players take turns drawing two cards (one from each deck) and placing them in a grid. The game ends when the magic square is complete. The game may end in the middle of one player's turn.

When playing a Trivial Pursuit card, the player names the card after one of its answers. The card is considered to have that name for the rest of the game.

Each played card must be orthogonally adjacent to at least one card already played.

The game is better if you follow these suggestions, but in specific cases you might get funnier headlines by breaking them.

The Man Bites Dog cards are full of words that clearly belong in headlines, but which (for the sake of generality) include no details. Trivial Pursuit answers are disconnected references to newsworthy topics. Combining them yields sentences that feel like real, specific headlines, but make no sense whatsoever.

Thanks so much for posting the rules, Leonard!!