Tue Aug 07 2012 09:20 Constellation Games Bonus Commentary #1: "The Time Somn Died": Surprise! Last week's plan was to post the bonus commentaries in the order in which I wrote the stories, starting with "Dana no Chousen". But a while back, when I gave Kate a suggested reading order to send y'all, I suggested chronological order, which is the opposite of that order.

As Kate will attest, this is not the first time I've said one thing about the bonus stories and proceeded to do the exact opposite thing. To nip confusion in the bud, I've swapped "Dana" and "Somn" in the commentary list and we'll proceed. 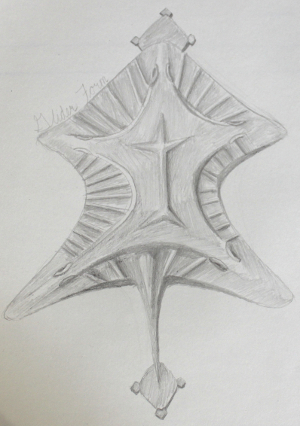 In another shocking twist, I hereby announce that two of these bonus commentaries will feature brand-new art! Brendan Adkins, William F. Buckley-esque thorn in my side, will be drawing something for "Dana no Chousen". I can only hope Dana's boobs will be tastefully covered with a gun or something.

But today, I offer pencil art of Her's glider form and aquatic form, drawn by pop painter Beth Lerman, inspired by Ernst Haeckel's zoological illustrations and my own crappy sketches. Unfortunately, because I switched "Dana" and "Somn" in the commentary list, I asked Beth for her art on very short notice and she didn't have time to draw Her's vacuum form. Beth still plans to draw all three forms present in "The Time Somn Died", and I'll let you know when I get the finished drawing.

On Thursday I'll reuse Jenny's Twitter profile image (also drawn by Beth) for "Found Objects". I don't have anything planned for "Pey Shkoy Benefits Humans"; maybe I'll draw some stick figures and blame them on Tetsuo. What I'm hinting at is, someone who can draw could get their art into this commentary series pretty easily. HINT.

One final note. Did you order bonus stories and never got them? Check the email that contains your compiled Constellation Games ebook. You never got that email? Then we got a problem; let me know. Let's begin:

"The Time Somn Died" is the story you got if you bought the cheap but not-too-cheap package. I decided to send you this one because I think it's the best of the three. This is a prequel to Constellation Games, the story of how Somn railroads herself into making the biggest mistake of her life. It's the missing left parenthesis to her letter to Tetsuo at the end of Constellation Games, in which she's coming to grips with the idea that she may not have made a mistake at all. She may have done the right thing for completely the wrong reason. 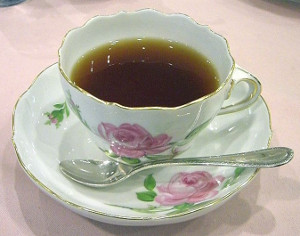 This story took a lot of inspiration from Iain M. Banks's Culture novels, which periodically show slices of life from a mannered post-scarcity civilization, slices of life which I find immensely dull. Reading those passages of Banks I truly understand what Douglas Adams meant by the long dark tea-time of the soul. I wanted to capture that uncomfortable feeling, to use it as setting, without actually instilling it in the reader.

This is tricky stuff. I knew I was playing with fire. But there was no other material to play with. I needed to convey that Somn has a tough time adapting to the contact mission because she's not a misfit. Unlike Tetsuo and Curic, she was perfectly at home in the Constellation. What gets Somn is a hidden nugget of greed that's never had a chance to come out: her desire to have a scarce experience, to be the first one to see something. She's pushed through the contact port by that little bit of greed and her family's pride in her smarts and her own damnfool stubbornness.

Tetsuo's version of this story would be like Ariel's story: the ennui would build up to a "screw you guys, I'm leaving" scene. Curic's story would be like Tammy's story: no time for ennui, just a lifetime of probably-pointless training that turns out not to be pointless after all. To make "Somn" anything other than a repeat of a story you've already seen, I had to show Somn soaking in the ennui but not consciously aware of it. And I couldn't have the in-story ennui instill real ennui in the reader.

The solution to both problems is pissy family drama.

"Somn" is nothing but a series of family arguments. Great thing too, because as I mentioned earlier, arguments are the best way to do exposition. I needed to show how the other-room works and how Slow People and fleshy people interact, so I wrote Somn's mothers reinstating Dad-Tessererre over Somn's objections. When Tessererre is reinstated, his character is immediately defined by his kvetching about the guys his wife and daughter hooked up with after he uploaded. I needed a lot of exposition from Her, the only character who understands what's going on, but infodumps are boring, so I wrote the bitchy antagonism between Her and the passive-aggressive Constellation Library.

I think it works great. I'm really proud of this story. For a work of short fiction I think it packs an immense emotional punch. Her's "tired of begging for mercy" speech gets me every time.

Before the miscellaneous commentary, I want to discuss the exciting issue of the units of measurement I made up for this story. I've never seen a clearer example of the tension between building a realistic alien world and evoking certain emotional responses in the human reader's mind. When I was just starting to write SF, I would have loved to see a detailed walkthrough of this sort of decision process. So here it is, in a special section I like to call "the time, the distance, and the mass":

I knew right off that using human units of measurement was out. There are no humans in this story. No one in the story even knows that humans exist. But in several places I needed to convey rough measurements, especially time scales, to human readers. I didn't want to make up fake names for the units, for the same reason I didn't want to spend Constellation Games calling the Aliens and Farang "kej" and "metrase". Every term you make up for a story takes up space in the reader's mind and makes it harder to read the story. So I presented all the measurements in the stories as estimates, as unitless powers of two. 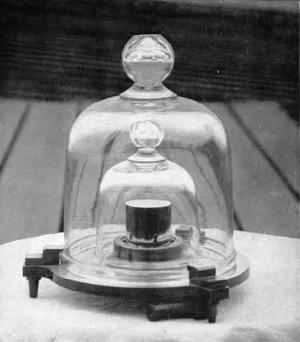 My original concept was that the unnamed Constellation units were based on the Planck units. For mass, this worked out fine. One kilogram is about 225 Planck masses, so the 231 mass mentioned in the first paragraph is about 64 kilograms. That fits the story. 231 sounds like a lot, but not an astronomical number. It's about a gigabyte of mass. And that's the only measurement of mass in the story, so I went with the Planck unit for mass.

But if I define 20 to be the Planck time, then one second is about 2116. That's a huge number! It's way outside your experience and mine. To human brains, 2116 doesn't look much smaller than 2137. But that's the difference between a second and a year.

Problem #2: I wanted to use a negative exponent for the scene where Somn imagines Dad-Tessererre speeding up his consciousness faster and faster. This conveys the idea that post-upload Tessererre inhabits a completely different cognitive universe from pre-upload Tessererre. But if 20 is the Planck time, negative exponents are impossible. Instead of going from 20 to 2-8, you're going from 2116 to 2108, which doesn't seem like a big difference at all.

For a phrase like "the minds below 20" to make sense, 20 has to be concomitant with the speed at which Somn's brain (and yours) works. So I defined 20 time as about a quarter of a second.

Now, if I wanted to be consistent I'd define 20 distance to be either the Planck distance (so that one meter would be about 2155), or the distance light travels in 20 time (so that one meter would be about 2-16). Neither of those is a good reader-scale number. The only distance measurement in the story is the diameter of the contact port, and as with the mass measurement in the first paragraph, the only thing that number needs to convey is "that sounds pretty big."

2155 is way too big and way too precise. Somn wouldn't estimate any measurement that precisely, even though 2154 is half the size of 2155. And 2-16 doesn't seem very big at all. So again, I calibrated the distance measurement according to a natural scale for someone as big as Somn. 20 is about a quarter of a meter, giving the contact port a diameter of about 32 meters.

Of course, now I'm stuck with these units for any future Constellation stuff. But since I set the time and distance units to Somn-scale for story reasons, it should work out fine if I need to use them again for story reasons.

On Twitter last week Emile Snyder suggested using made-up abbreviations instead of leaving the numbers totally unitless, which would also have worked.

PS: If you go through my math above you'll probably find some conversion errors, and if you tell me about the errors I'll fix them, but I don't care all that much, since my point is that the numbers in the story are Somn's rough eyeball (eyespot?) estimates.

Don't get used to this much bonus commentary; this is the longest one by far. But be sure to come back on Thursday for the comparatively minuscule commentary on "Found Objects", when Jenny will say, "Ariel's not the most reliable."