Thu Feb 06 2014 14:15 Writing Aliens: I've put online the slides and prepared text of my Foolscap talk, "Writing Aliens", or, "Duchamp, Markov, Queneau: A Mostly Delightful Quilt". On one level it's a simple introduction to algorithmic creativity, but it's also about creativity in general, the anthropomorphization of software, and why the features that make Twitter so aggravating for humans make it such a great platform for bots. Bonuses include a recap of Brian Hayes's article on Markov and a telling of the @Horse_ebooks saga as a reverse alien invasion. 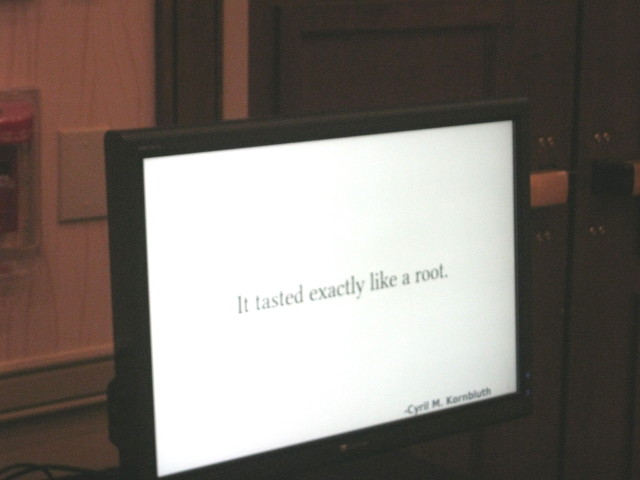 The two site-specific installations that I hinted at earlier were custom scripts displaying variants on Ebooks Brillhantes and Hapax Hegemon. The text corpus comes from a scrape of everything linked to from Free Speculative Fiction Online. The software is a heavily modified version of Bruce, modified a) to stream data from a flat text file and create the slides on the fly, instead of trying to load 20,000 slides into memory at once; and b) when restarted after a crash/shutdown, to skip the appropriate number of slides and pick up where it would be if it had been running continually.

Unfortunately I never got a picture of both displays running side-by-side; if you have such a picture, I'd really appreciate it if you could send it to me.

Just after I set up the ebooks display, I met Greg Bear, who was at Foolscap running a writing workshop. We walked over to the screen and I explained the project to him. He said "I'd better not be in there." AT THAT MOMENT the screen was showing the quote "We zoomed down eleven" from this free sample of Blood Music. It was pretty awkward.