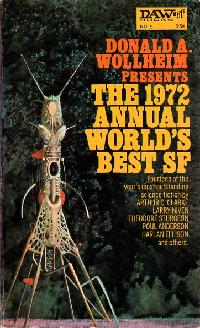 Just finished Donald A. Wollheim Presents The 1972 Annual World's Best SF, an old SF anthology with one of those funky 1970s Yves Tanguy-esque cover paintings, obtained, I believe, through Jed Hartman. While it's fresh in my mind I wanted to take note of my favorite stories from the book. If nothing else, it's sometimes useful for me to go back and remember stories that I really liked.

As you'd expect from a year's-best anthology all the stories in this book are pretty good by 1972 standards. I'd say the champion is probably "Real-Time World" by Christopher Priest, which is weird in a way I found really interesting. Has a PKD-like plot but written in a different style. Honorable mention to Joanna Russ's "Gleepsite", which is weird in almost the same way, and a lot shorter. R. A. Lafferty's "All Pieces of A River Shore" was my favorite story in the book all the way up to the last paragraph, which enraged me to the point that I've bumped it down to third place.

Runners-up: Paul Anderson's "A Little Knowledge" was slight but really fun to read. Larry Niven's "The Fourth Profession" (Hugo nominee!) combined the superb inventiveness characteristic of the very best SF with a very 1972 conception of the range of acceptable human behavior. The introduction to "The Fourth Profession" mentioned it was originally published in a Samuel Delany anthology series called Quark, which looks like it's got a lot of good stuff.

Now that I've started writing all this down, I'll conclude by mentioning that I recently read the September/October 2011 F&SF and my favorite story was "Aisle 1047", Jon Armstrong's goofy story of brand warfare.