Sat Apr 02 2016 22:10 March Film Roundup: Roundin' up the films, roundin' up the films... oh, hi. I didn't see you there. Because I'm looking at my computer monitor, typing this paragraph. Hey, you want to hear about some movies?

This month the Television Spotlight shines on Drunk History, a Youtube series that made the leap to basic cable and has been going strong for long enough that I'm comfortable spotlighting it here even though there's (hopefully) many more seasons to come. Sumana has written about the uses of history in Drunk History, Hamilton, and the comics of Kate Beaton, so I'll just say that all three use anachronism to deconstruct the accepted narratives of Serious History. Drunk History treats Serious History as an inhibition to be broken down with booze, and then tries to build the wall back up with 100% literal reenactments that treat the drunken ramblings of the narrator like they're Shelby Foote talking about Gettysburg. Great stuff.

I'm pretty sure Drunk History was also the inspiration for the hilarious, Mormon-friendly Kid Snippets Youtube series, which means that even as it's still on the air it's paying back in inspiration to the indie-web-film community that spawned it.

(2) Sun Apr 24 2016 17:40 I'm Stuffed With Pastries And Drunk With Power: Sumana and I just returned from an anniversary trip to Paris, courtesy of Sumana's mom. We had a great time, and as time permits I'll be putting up mini-travelogues of the major sights we saw. I'll start things off with a catalog of our lesser adventures and discoveries.

Okay, that's it for now, but tune in soon for scientific instruments, Duchamp's obviously fake readymades, and the Tetsuo Milk-approved netherworld of Versailles. Just to whet your appetite, here's the sort of thing you see in the Musée des Arts et Métiers, a really cool museum that wasn't mentioned by either of the guidebooks we used, but was mentioned by every French person we asked.

Wed Apr 27 2016 06:56 Paris Graffiti: There's a lot of boring graffiti in the world, but sometimes it's cute or interesting, and I think the Francophone cartooning tradition means there's more interesting stuff in Europe. Here are the greatest acts of vandalism I saw on our trip to Paris: 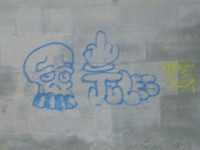 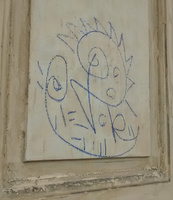 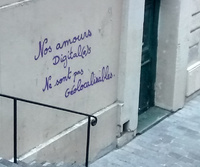 Man, that second one's like a Paul Klee graffito. The snail and the "Nos amores digitales" were on the same wall!