I'm gonna shoehorn Book Roundup into this post because although I started three books on my commute, I lost interest in two of them a fair way in, and the only book I finished in February was Colson Whitehead's The Underground Railroad. A great horrifying read with a sinister George Saunders-type feel in places.

I thought I'd also finish The Fortress of Solitude, but that book's a lot longer than I thought! I'm not even halfway through. Stay tuned!

Thu Mar 23 2017 19:56 FRED: This won't wait for Film Roundup because it's only showing until the end of the month. Last week Sumana and I went to see FRED at Dixon Place in Manhattan and had a good time. It's a short, funny play with a Starship Titanic feel. Check it out! 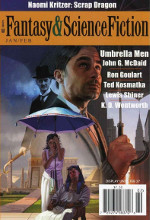 Hey there. After keeping this magazine in the house for five years, I finally read it. You see, I only like things that are vintage. Sometimes you gotta age it yourself.

Standout stories for me were Naomi Kritzer's adorable "Scrap Dragon" and Alexander Jablokov's gross-out "The Comfort of Strangers". I guess I'm exposing the fact that I haven't read the Rich Horton anthology that reprinted "Four Kinds of Cargo" (The Year's Best Science Fiction & Fantasy: 2013 Edition), since that also reprinted "Scrap Dragon". I repeat: adorable.

In the course of an essay on vampire fiction, Elizabeth Hand mentions the ur-text, John Polidori's The Vampyre, as well as the 1845-1847 serial "Varney the Vampire" which ran to 670,000 words (Project Gutenberg has a measley 327,927 of those words). I don't care about vampire stories but I'm always interested in the first or biggest example of something. This column also made me aware of Theodore Rozak's Flicker, in a would-actually-want-to-read-it way.

Man, "Varney the Vampire" makes me think of vampire Jim Varney. How come they never did an Ernest movie about that? Seems like a natural fit. Bye for now!