Tue May 02 2017 22:29 April Film Roundup: As they say, April showers bring Film Roundup. Many, many people say this, I'm told. Hundreds, possibly millions, chanting in unison. Can they all be bots? I say no.

That's it for now, but we're almost caught up on Jane the Virgin, so maybe next month the Television Spotlight will have a new focus. 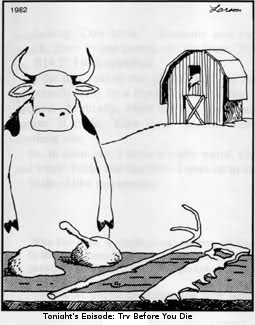 It's been seven years since the last episode of the crummy.com podcast, so you might be forgiven for forgetting that it even existed. In fact, forgetting about a podcast is not a sin in any human religious tradition, so no forgiveness necessary. Just enjoy tonight's episode, "Tonight's Episode: An Oral History of Murder".

This is an hour-long conversation between myself and Sumana about Tonight's Episode, a crummy.com feature even older than our ancient podcast, and the first creative collaboration between the two of us. Listen, and explore the origins of Internet comedy so small in bytesize that a joke might be compared to a short sound a bird might make.

A couple things I forgot to mention in the podcast: first, Tales from the Crypt and the Cryptkeeper's stupid puns as a predecessor to Tonight's Episode. Second, Murderous Magnetism, the Jason Robbins magnetic poetry kit for making Tonight's Episodes.

Thu May 11 2017 23:43 Minecraft Archive Project - 2011/11 Sample: For a while I've been working with Jason Scott on the best way to make the data from Minecraft Archive Project available. The basic problem is that if you zip it up, it's many terabytes of data, and if you don't, it's millions of individual files. Although the Internet Archive is technically capable of handling either one of those options, neither is great for sharing data with the public.

The Minecraft Geologic Survey gives you an overview of everything posted before July 2014, but generating it was incredibly processor-intensive, so it's not really something I can update. So we decided to try out time slices instead.

Here's a 22-gigabyte archive containing everything Minecraft-related I could get that was posted in November 2011. If you think you might be interested in doing something with the full archive, please download this tiny slice and see if you can figure out how it works. If you have problems, complain to me. (Not to Jason, he just puts the files on the Archive.)

I picked November 2011 because it comes in the month of the 1.0 release, at a really interesting time for the medium. By 2017 standards the maps in this set are very primitive, but it was right around here Minecraft went from indie darling to decade-defining megahit. At the same time, fans had started to chafe at the limitations of the medium-- was the month I wrote my "Programmable Minecraft" essays, where I basically asked for command blocks.

Command blocks would be introduced in August 2012, and IMO they mark the distinction between the "silent film" era of Minecraft and the "talkie" era. I think the next most important month-slice of data would be August 2012, which would let us see what people did immediately after they got command blocks. But the point of this exercise is not to release one month at a time; it's to release a single month and make sure the package is usable before we package everything else the same way.