Mon Jan 02 2017 11:57 December Book Roundup: Just a few notes on the books I read in December 2016. Books marked with a * are ones I read for free through NYPL's SimplyE mobile app. (Big news on that coming up! Also, I guess I should write a simple explanatory post for people who don't want to read my RESTFest talks.)

Film: Maintaining Film Roundup Roundup (now updated with 150 high-quality films!) makes it pretty easy to come up with a top ten for 2016:

Look at that list, we got four documentaries on there.

My lower-tier "recommended" list gets longer every year; here's a quick stab at the top ten of my twenty-one recommended movies from 2016:

I'm not really happy with calling that second tier "recommended" because it implies I'll scoff at your decision to see a solid film like Arrival or Kung Fu Hustle that I didn't put on my list. Hopefully no one does the data gathering necessary to deduce (incorrectly) that I'm scoffing at you.

After several years of Film Roundup I think I can now make what to me looks like a normal person's top ten film list, containing only movies from 2016. All of these were worth watching:

Kind of a boring list though! Where are the nuns, the fourth-wall-breaking gangsters, or the convicts handcuffed to each other? Answer: in movies from previous years. 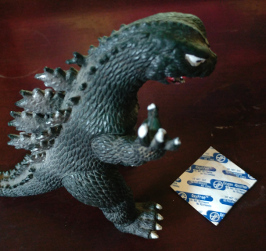 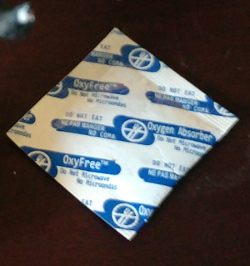 Sat Jan 14 2017 12:32 The Crummy.com Review of Things 2016: Books: Nearly all the books I read in 2016 were in electronic format. I either read library books through SimplyE, or I dug through the piles of ZIP files I've accumulated through Simon Carless's video game StoryBundles. Greg Millner's Perfecting Sound Forever was the only paper book I read in 2016 that I recommend; in fact, it's the Crummy.com Book of the Year.

I've got seven more super-recs and I'll give little capsule reviews for them, since they predate the first occurrence of Book Roundup. I read a decent amount of fiction, but you'll notice there's not much fiction on this list. What happens in my head when I read fiction seems highly idiosyncratic, so I'm more comfortable recommending super-detailed nonfiction.

(2) Sun Jan 15 2017 20:25 The Crummy.com Review of Things 2016: Games: If you've come for cutting-edge gaming news, I must disabuse you of the notion you've somehow acquired. I buy computer games when they're ported to Linux. Then apparently I only talk about them at the end of the year. Let's get started!

Two excellent tabletop games stick in my mind: the thrilling Pandemic Legacy, about which much has been said elsewhere; and the unassuming Stinker, which once you play it is revealed as an absolute marvel. Stinker cleverly fixes all the problems, large and small, with "spell-something" games and "one-person-judges-everyone-else" games and "come-up-with-something-funny" games. It's not as surefire a hit as Snake Oil, but I love it and it's usually a hit when I introduce it to new players. Stinker is the Crummy.com Board Game of the Year.

Three years ago I closed the book on non-tactical RPGs and declared Mother 3 the all-time winner. Well, now I gotta re-open that book because Undertale improves on the formula. It's clearly based on the Mother series, but it has a solid new combat mechanic, a lot of memorable characters, and a type of humor I like better than the humor in the Mother series (which I do like, quite a bit). I really disliked the climax of Undertale, but a lot of Mother 3 was rambling and unfocused, so it kind of cancels out. Undertale overcomes my prejudices to become Crummy.com Computer Game of the Year.

Runner-up is Duskers, the space exploration game which combines survival horror with system administration. Your typing speed can make the difference! Super creepy, but feels a bit unfinished. 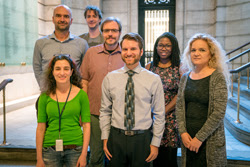 I'm not comfortable bragging about the SimplyE product because it needs a lot of improvements, and I feel like saying how nice it is will lead to people thinking (or at least asserting) that I'm okay with the status quo. But if you compare it to the status quo ante, it's really damn good. We took checking out an ebook from a 17-step process to a 3-step process. And I'm totally happy bragging about the team, which is incredible. For the first time I ran a bunch of job searches and decided who to hire, and I think the past year's work has proven I made good choices.

At the end of the year, NYPL recognized our team with a Library Leadership Award! To the right is our official team photo (two of the developers are not pictured). I think this is an incredible achievement for a team that basically didn't exist a year ago.

Writing: Late 2015 I pitched a number of novels to my agent and we decided on Mine, a Rendezvous with Rama type political thriller. Lately, though, I'm haunted by the pitch I wrote for Nice Things, a novel about the fascist takeover of the Federation. Sometimes when I sit down to write Mine I feel like I should be writing Nice Things instead, but most of the time I'm glad I'm working on absolutely anything else.

Progress on Mine is slow but steady. But slow. My increased responsibilities at the library haven't been good for writing time.

Short stories I wrote in 2016 include "Quest For Boredom" (which I... supposedly sold??? but haven't heard back), "The Girls Boys Don't Notice" (possibly the best title I will ever come up with), "Fool, Professor, Peasant, King", and the unsellable "Unicode Changelog", which I might self-publish.

Situation Normal is still on the Desks of Editors.

Bots: I've drastically scaled down my use of Twitter because I don't like what it does to my brain. As a corollary, I don't really like that my whimsical software encourages people to spend more time on Twitter. So I've stopped putting bots on Twitter. Also, Twitter randomly suspends my bots without telling me. After the completely innocuous Vintage Groaners was suspended, I decided it wasn't worth the hassle.

I've thought about taking down my bots in a fiery cataclysm, rather than letting Twitter pick them off one by one, but a lot of people get happiness from Minecraft Signs, Hapax Hegemon, and (finally!) Smooth Unicode, so I'll commit to keeping the big ones working at least. I have a solution in mind for my computational creativity going forward, but I'm pretty damn busy so it's going to be a while. I've been doing this stuff since 1998 and it's still something I like, so consider this not a goodbot, but rather au botvoir.

(1) Wed Jan 18 2017 13:20 Jokes For Minecrafters: The last time I went to California, my nephew told me lots of punny jokes about animals ("Why are cats so vain? Because they're purr-fect.") He'd gotten these jokes from a Pokémon joke book, in which the jokes were about Pokémon ("Why are Meowth so vain? Because they're purr-fect."), and kindly translated the Pokémon into real animals for my benefit. Which worked out well because the jokes had clearly been about real animals to begin with.

This reminded me that I'd been meaning to report back about two other joke books about a common childhood obsession: Jokes for Minecrafters and Hilarious Jokes for Minecrafters. I'm really interested in the shady but seemingly profitable world of unlicensed Minecraft books. I've seen Minecraft self-insert fanfic being sold as an 80-page chapter book at Target! I applaud Mojang's lax stance on fan works but that seems a little excessive.

I recall from my own childhood that this sort of obsession-feeding book is usually a big disappointment once obtained. Themed joke books are the worst because they're often a big cash-in on preexisting folk jokes. Plus you have to find someone who's as big a nerd as you, and wants to listen to you tell the jokes instead of reading the book themselves.

I was prepared for disappointment, but I had to find out what Minecraft kids' jokes were like, so I ventured one more time into a world I'd abandoned long ago. Fortunately, this time I didn't have to pay the Troll Book Club to send me two slim paperbacks. I just put the ebooks on hold at NYPL.

And... the best joke in the series is probably the very first one in Hilarious Jokes for Minecrafters:

Q: What happens when a creeper walks into a bar?
A: Everyone dies.

It's all downhill from there. Here are the two runners-up:

Q: Why do players shop at Endermen yard sales?
A: To get their stuff back.

I'm not here to make fun of bad jokes, because comedy is hard, but most of the book is more like this:

Q: What did the pig say to the creeper?
A: Nothing. The creeper blew up the pig.

Many entries have the form of jokes, but are actually Minecraft trivia. Here's one I didn't know:

Q: How do zombies and skeletons keep from burning during the day?
A: They stand on soul sand.

This one hasn't aged well:

Alex: "What do you call a polar bear in Minecraft?"
Steve: "I don't know. What?"
Alex: "Lost, because there are no polar bears in Minecraft!"

I need some help on this one:

Q: What happened when it became so cold in the icy biome?
A: The snow golems were holding up pictures of thumbs!

There are also many jokes that require knowledge of the Orespawn mod, which I'd never heard of. One book had a separate chapter dealing with "mods", but a lot of Orespawn jokes were not in that chapter. This seemed unfair to kids who are just trying to understand jokes and maybe laugh a couple times.

This one makes me irrationally angry:

First player: "I heard the End has its own soundtrack."
Second player: "What does it sound like?"
First player: "You can only hear it in the End."

This one has an artifact that makes me think most of the book was copy-and-pasted from an IM conversation:

You might be a Minecraft addict if you forget to give your mom a present for her birthday and instead get her a Minecraft account XD.

Anyway, I'm here to tell you that the terrible Amazon reviews of these books are more or less accurate. In the spirit of reconciliation, I thought I'd close by trying my hand at corny Minecraft jokes:

Q: How does Steve detect if someone is raiding his marijuana stash?
A: He uses a BUD switch.

That one's on the house!