(2) Wed Sep 05 2012 10:25 Breaking Character: You probably know by now that I'm writing another novel. (Current word count: 33k.) I wrote Constellation Games almost entirely in secret, but after I sold it I got a lot more open about the revision process. For this one I want to talk about the writing process (since that's a big part of what's in my head right now) but I don't want to just blab about all my fabulous ideas and how great this book is gonna be. My plan is to strike a balance with occasional posts as I discover new things about craft. Today: stock characters.

The new novel covers a lot more ground than Constellation Games, and because there's a whole lot of people who only show up in one scene I'm making much heavier use of stock characters. I never paid much attention to stock characters because... you're not supposed to. They move the plot forward and they go away. You're not even supposed to have them in short stories, because word count is so precious. But now that I'm writing a lot of them I've discovered something interesting. With one line of dialogue you can break the stock-ness of a stock character, in a way that serves a larger story purpose.

An example of a stock character in Constellation Games: the goldbricking rules lawyer running the BEA counter in chapter 18. What a jerk. But imagine if during his one scene, he had had one line of dialogue expressing curiosity about what Curic is like. This guy works for the BEA, his whole job is passing messages between humans and ETs, but he's never talked to an ET himself and never will. He's still a jerk, but now he's a sympathetic jerk, like Ariel.

I didn't do this because a) I didn't think of it, and b) I accomplished that story purpose earlier, when Krakowski bitches about not having the same clearance to visit Ring City as the people it's his job to monitor. But one line of dialogue could have turned the stock character into something more closely resembling a real person.

In the new novel I needed a scene with one of those stuffy Starfleet admirals who are always chewing out Captain Picard in ST:TNG. So I wrote this stock character and he started chewing out one of the main characters, but then something odd happened:

Stuffy admiral: Why didn't you do [plot-specific detail]?


Main character: [Plot-specific explanation.] It would have been suicide, sir.


Stuffy admiral: Our analysis agrees with you. But you're discounting a long service tradition of glorious suicide.

I was not expecting to write that, but I like it. This guy still has a stick up his ass, but now he also has a sense of irony and he's willing to let it show. It's not something you'd get in ST:TNG, but I could imagine Admiral Kirk saying that to, say, a Captain Chekhov. With that line, not only does the admiral stop being a total stock character, but his willingness to talk that way to his subordinate says something about their relationship. A conversation that might have only advanced the plot now also develops one of the main characters.

This is the first draft, so there's no guarantee that line or that scene will make it into the completed novel, but now that I've seen how that works I'm trying to do something similar with all the one-shot stock characters. Maybe I'll overdo it, who knows. I'll also be looking to see if/how other writers do this.

I think this technique might only work in a comedy. Even when the stock-breaking bit isn't a joke, it's a surprise that works like a joke. It gives you that wait a minute... feeling.

Fri Sep 07 2012 12:39 Maloideae: the game of strained but learned analogies: I've been sitting on this for a while and figured I'd package it up for you. Maloideae is my latest free print-and-play card game, the follow-up to my earlier remix, Crazy the Scorpion. Maloideae is basically a parody of Apples to Apples, but if you give it a shot I think you'll find it has its own vibe and is a lot of fun. 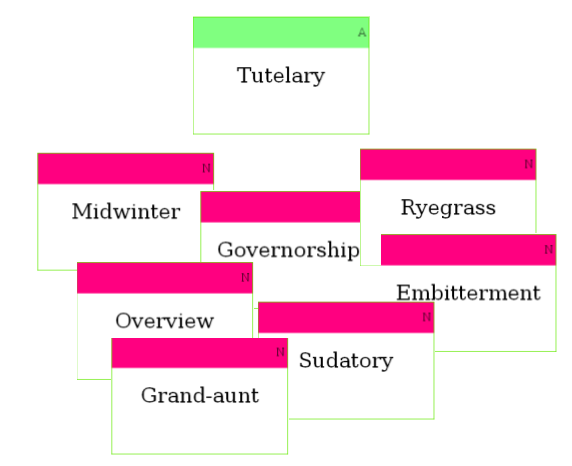 (12) Mon Sep 10 2012 11:54 Ticket to Grief: Ticket to Ride comes with 30 destination cards. You can start out with three, and on your turn, you're allowed to draw three new cards and keep them all. This means you can very rapidly take almost all the destination cards for yourself. You would get a very large negative score, but prevent the other players from getting a good score or having anything to do in the endgame.

Once the deck of destination cards runs out, you could start drawing two train cards from the deck every turn, and keeping them permanently. There's no hand limit.

If you're bored with Ticket to Ride, this is a great way to ensure you're never invited to play it again.

Sat Sep 15 2012 07:28: Third board game post in a row. It's much easier to teach Cosmic Encounter if you pick out ten aliens ahead of time, separate out their flare cards, and hand out two alien cards to everyone. Instead of handing everyone two flare cards and making them look through the pile for the corresponding alien cards.