Wed Jan 03 2018 09:01 Film Roundup Special: Miracle Mile: Way back in June I saw Miracle Mile (1988), and loved it, but didn't really review it because my recommendation is that you go in knowing nothing except that it's a very dark horror movie. Now it's been six months and I'm going to talk about it, so skip this post if you want to try going in cold.

Miracle Mile evokes the fear its protagonist is feeling by making the experience of watching the movie congruent with Harry's plot arc. As he flails around looking for a loophole in the end of the world, you're flailing around trying to figure out what kind of movie this is and how to watch it. The normal plot components from a zombie movie—the vehicles, the weapons, the hyper-competent Denise Crosby—are shown and then taken away. Landa (Crosby) leaves our protagonist in the dust and Harry spends the rest of the movie trying to catch up with her. Of course, it doesn't work, and even if it did, it's far from clear that Landa will live much longer than Harry. This is the nightmare where you try things and none of them work.

It is also my personal nightmare. I grew up in the Los Angeles of this movie and my father's postcards: Wilshire Boulevard, Fairfax, the La Brea Tar Pits. It's a place of bright lights and high contrast: malls frosted in neon, sunsets and fountains. Film noir shows the corruption beneath this bright facade; Miracle Mile allows us to believe the facade, shows the blossoming of love, and then just blows it all up.

This is what to be afraid of in 1988, and now. This thing we've built could just go away, forever, in moments, for no reason at all. The bad things in other movies are just metaphors for this.

The worst part in Miracle Mile isn't even the nuclear explosions; those are the gravestone on a civilization that has already collapsed. It collapses in minutes, like, when Harry's in the bathroom or something. There's a pretty good comic miniseries called "Memetic" which covers the same ground but also introduces a lot of body horror, so YMMV.

In a normal emergency people will band together and help each other, but Miracle Mile says that in the apocalypse all bets are off. This Prisoner's Dilemma will not have any further iterations, so you might as well go out with one last Defect. Despite it all, a few people choose Cooperate. It does no good, but at least they die well. That's what passes for hope in this movie.

I saw fifty-three films in 2017, and twenty-six of them (plus one short) were good enough to be immortalized in Film Roundup Roundup. Of movies I saw for the first time in 2017, here are my top ten:

In particular, Get Out and Miracle Mile are just what we need right now: rom-coms that turn into horror movies.

The Crummy.com Book of the Year is Democracy for Realists by Christopher H. Achen and Larry M. Bartels, a survey of the political science literature that aims to figure out what is actually going on in peoples' heads when they vote.

Other highly recommended books I finished this year:

Not a lot of games played this year. I think the only new board game I played in 2017 was season 2 of Pandemic Legacy. We're not even halfway through the year and at the moment I'm really angry at the game, so not the best time to ask me for my opinion.

The Crummy.com Game of the Year is "Streets of Rogue", obtained through a Humble Bundle. It combines the combinatoric item explosion of Nethack with the immature mayhem and actual explosions of "Grand Theft Auto". It feels like the best possible VGA DOS game.

Also highly recommended: "Flinthook", "Oxygen Not Included", and "XCOM 2" (but only with the War of the Chosen DLC, which makes it an expensive proposition). I played "Frog Fractions 2" for a few hours, loved the creativity and the ZZT framing device, but when I stopped playing it I didn't pick it up again.

The 2017 bot situation is complicated. I put all of my bots on botsin.space, a Mastodon instance devoted to bots. (I also moved my main social media presence to botsin.space, using Twitter only for announcements.)

To help me out with the move I wrote a really neat framework called botfriend, which makes it easy to run some bot code on a schedule and publish the result to Mastodon and/or Twitter. I ported all my bots to this new system and got rid of a ton of duplicate code.

I think botfriend is really useful if you manage a lot of bots, and pretty easy to get set up if you're familiar with Python, but I haven't polished it or done a big promotional push, because my big initial impetus was to stop the situation where each new bot I create makes Twitter a more interesting deathtrap. Once I got to that point, I decided all of my spare time should be devoted to finishing Mine. So there haven't been any new bots for a while, and doing a proper rollout of botfriend is a project I'm putting off until after this novel is done, just like other fun things like buying a Switch and playing a bunch of Mario.

I gave a couple talks early in the year at Penguicon but I think my best talk of 2017 was Behold, mortal, the origins of robotfindskitten... at Roguelike Celebration.

The Library Simplified team and I made a lot of progress towards creating a new library ebook ecosystem, though not as much as I'd hoped. There are now libraries in Maryland and California in the SimplyE system, and we've got code contributions coming in from outside NYPL.

I wrote four short stories in 2017: "Plain Sight", "Two Spacesuits" (probably the best one), "The Unicorn Cleanse", and "Continuity". No sales!

Situation Normal is still out to publishers. Mine is well past the halfway mark and I hope to finish a draft in the next few months, after which, botfriend, Mario, etc.

I saw the solar eclipse from Nashville, which was a lot of fun.

I kept my weight more or less under control in 2017, with the happy result that I recently bought a heavily discounted topcoat to deal with the winter chill, and unlike what happened eleven years ago, the topcoat looks pretty good on me. However, yesterday I wore it with a light-colored sweater and just like in 2006 I looked like a slob who had stolen someone else's topcoat. The difference being that I'm now in my late thirties and I don't care as much.

Thu Jan 11 2018 12:59 Dinosaur Space: I've been slowly reading through Issue #2 of Seeds, a zine created for 2017's Procjam, and I just encountered the fabulous page 81, where Elle Sullivan shows off the amazing Dinosaur Generator. It parameterizes dinosaur anatomy to explore the space of plausible dinosaur bodies.

A follow-up project, THE tinySAURUS GENERATOR, brings cute pixel dinosaurs to Twitter. I like the dinos, I like the detailed explanation, and I like the technique of having multiple templates, instead of trying to make one uber-template covering the entire creative space.

Wed Jan 17 2018 09:32 Bot Muse: I finished reading through Seeds #2 and the last article was a treat: "Popular Visual Descriptions of Early Generative Systems" by James Ryan, a survey of illustrations used in 1950s and 1960s media to convey the concept of generative art. Lots of botniks taking jobs from beatniks, but the best bit is the wind-up muse of the "computer poet", taken from an old New York Times article: 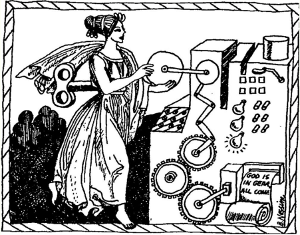